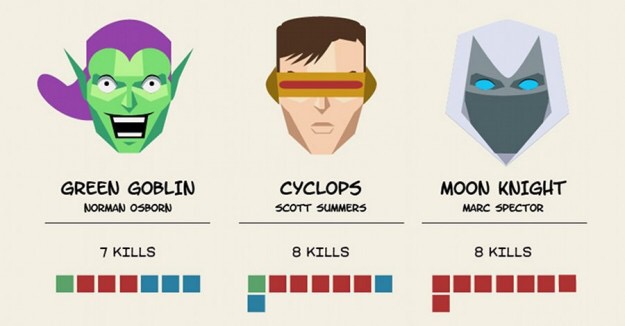 “While the Avengers are doing everything they can to save people on screen, comic readers know that superheroes have gotten their hands bloody more than a few times. But for everyone with a strong opinion on killing in comics, now you have some official numbers to back up your argument in the form of a handy “Murderers of Marvel” infographic from the UK’s Morph Suits.

The makers of licensed Marvel body suits and other cosplay aides put together a rundown of who has killed whom in the Marvel Universe, ranking the guilty from merely Dangerous to straight up Lethal. While you may quibble over some of their picks (Captain America is listed as killing Harry Truman, but at the time Truman was a zombie, so it’s debatable), the whole exercise is worth a gander. Check it out below.”