Black Panther: Where is Wakanda? Wakanda is a fictional nation in the Marvel Universe. It is the most prominent of several fictional African nations in the Marvel Universe, and it is home to the superhero Black Panther. Wakanda is located in Northeastern Africa, although its exact location has varied throughout the nation’s publication history: some sources place Wakanda in East Africa, just north of Tanzania, while others – such as Marvel Atlas #2 – show it bordering Lake Turkana, near Somalia, Kenya and Ethiopia (and surrounded by fictional countries like Azania, Canaan and Narobia). Wakanda first appeared in Fantastic Four #52 (July 1966), and was created by Stan Lee and Jack Kirby. The name is evocative of the Wakamba tribe of Kenya. 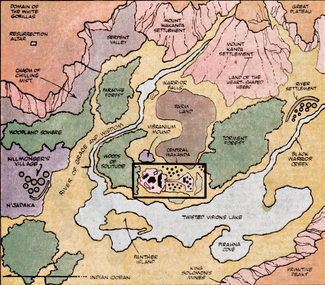 The Wakandan royal line began with Bashenga, an ancient Wakandan. Bashenga was supposedly the first king of unified Wakanda, and the first Black Panther some 10,000 years ago.

In the distant past, a massive meteorite comprised of the sound-absorbing mineral vibranium crashed in Wakanda, and was unearthed a generation before the events of the present-day.