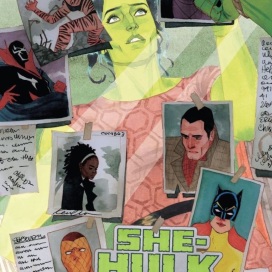 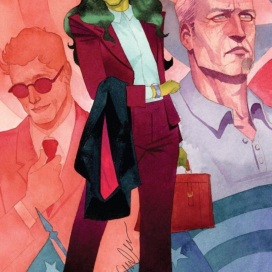 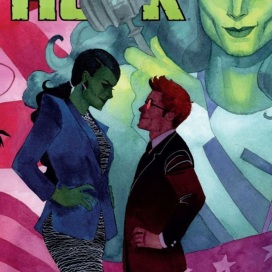 She-Hulk was created by Stan Lee and John Buscema. She first appeared in Savage She-Hulk #1 (February 1980). A cousin to Dr. Bruce Banner, Walters once received an emergency blood transfusion from him when she was wounded, which led to her acquiring a milder version of his Hulk condition. As such, Walters becomes a large powerful green-hued version of herself while still largely retaining her personality; in particular she retains her intelligence and emotional control, though like Hulk, she still becomes stronger if enraged. In later issues, her transformation is permanent.

She-Hulk has been a member of the Avengers, the Fantastic Four, Heroes for Hire, the Defenders, Fantastic Force, and S.H.I.E.L.D. A highly skilled lawyer, she has served as legal counsel to various superheroes on numerous occasions.

She-Hulk was created by Stan Lee, who wrote only the first issue, and was the last character he created for Marvel Comics before his return to comics with Ravage 2099 in 1992. The reason behind the character’s creation had to do with the success of The Incredible Hulk (1977–82) and The Bionic Woman TV series. Marvel was afraid that the show’s executives might suddenly introduce a female version of the Hulk, as had been done with The Six Million Dollar Man, so Marvel decided to publish their own version of such a character to make sure that if a similar one showed up in the TV series, Marvel would own the rights.

All but the first issue of The Savage She-Hulk were written by David Anthony Kraft and penciled by Mike Vosburg, and most issues were inked by Frank Springer. Vosburg later remarked, “The oddest thing about that book was that Frank drew really beautiful women, I drew really beautiful women, and yet, the She-Hulk was never overly attractive.” The Savage She-Hulk series lasted until 1982 where it ended with #25 (March 1982). She-Hulk then made guest appearances in other characters’ books. Her earliest guest-starring adventures followed no specific story line, besides her recurring bad luck with automobiles. She-Hulk also appeared in the limited series, Marvel Super Hero Contest of Champions (June to August 1982), in which numerous superheroes are kidnapped from Earth to fight in space.

She-Hulk becomes a member of the Avengers in Avengers #221 (July 1982). Her early Avengers appearances continued the running gag about her car troubles. She-Hulk also made occasional guest appearances in The Incredible Hulk. Her appearance in Avengers #233 (July 1983) was drawn by John Byrne, who would later become strongly associated with the character.