The Mighty Thor vs. The Celestial, Arishem the Judge (Part 1) 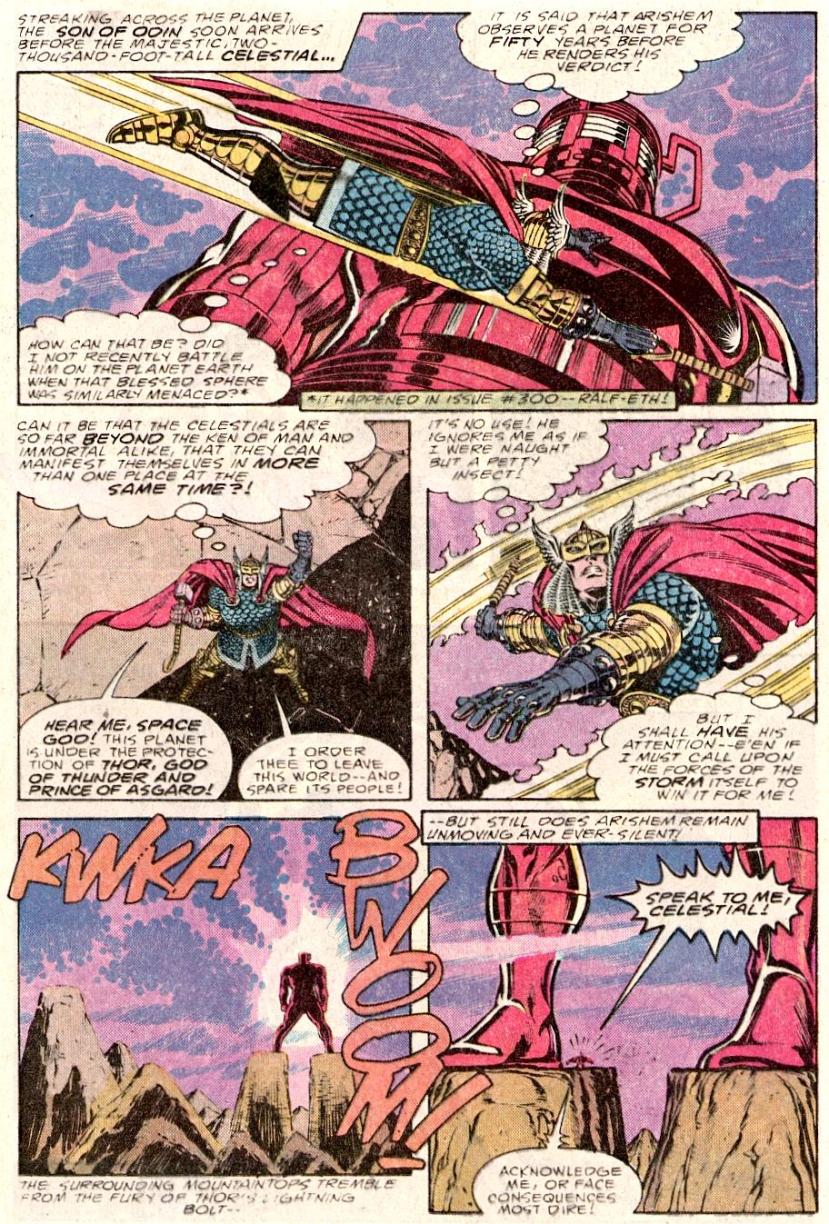 Arishem is the leader of all Four Celestial Hosts on Earth as well as Fourth Host on the planet called Pangoria and a Fifth Host on an unnamed planet in a distant galaxy. He is also the leader among the delegation of Celestials who waged war on the Watchers in an unknown galaxy. He was one of two Celestials who had the right and ability to judge which planet’s civilization would live and which would die.

The Celestials are a species of extremely powerful extra-terrestrial cosmic beings. The alien race influenced key events in human history for mysterious and unclear reasons. They were responsible for key human evolutionary events, such as the genetic-offshoot races the Eternals and the Deviants as well as the emergence of super-humans both through the inclusion of the “X” gene and apparently humanity’s ability to mutate benificially as in Bruce Banner not dying of radiation poisoning when exposed to the gamma bomb,and instead becoming the Hulk- for example

A Celestial”like” progenitor was present at the beginning of all things along with the naicent Watchers, The “Elder Gods”,the two cosmic beings kept in the Kyln by Galactus until their release during the Anhillation Wave’s first invasion from the Negative Zone.Template:Issue Needed

It was speculated by Reptyl that the Celestials may be the cause of the widespread of mammalians in the evolution of life on many quadrants of the cosmos.

It is believed that rhe Celestials can be credited with indirectly (through the Eternals) influencing and aiding the development of many ancient advanced civilizations such as the Aztecs, The Maya, The Incas, The Atlanteans and many more

At the beginning of time, the Celestials were an incredibly abundant species. There were “as many as the stars themselves.” However, during the conflict known as the Celestial War in which the Aspirants waged war against these cosmic beings for dominion of all existence, the Godkiller Armor was created. A weapon of such power the Aspirants used to annihilate the Celestials. However, in the end, the Aspirants lost the war and were crushed by the remaining Celestials. This information however comes only from a malfunctioning Rigelian Recorder android that, besides exhibiting genocidal opinions (and acts) exhibited more than a few historical “opinions” it stated as fact.
The Celestials resemble massive apparently male-or sexless armor-clad humanoids of enormous size, with most of them standing two thousand feet (600 meters) in height and some even larger (Exitar stands over 20,000 feet high).

Their agenda is unknown. They were responsible for the creation of two offshoots of humanity — the Eternals and the Deviants — on Earth one million years ago. However, through Celestial experimentation, mainline humanity retained the greatest potential for superhuman abilities.Template:See History above.The Celestials conducted similar experiments on many other species, including the Skrulls, whose main and Eternal branches were soon supplanted by the Deviant, shape-shifting branch of that race.

The exact purpose of the Celestials’ genetic manipulation is unknown.Repetedly returning to each world, the races in question are evaluated over a 50 Earth-year period and finally Should an experimented race “fail” by the Celestials’ standards, Arishem the Judge arrived on the target world to herald the coming of Exitar the Exterminator, a Celestial ten times his height that “purifies” the offending world and race by destroying its non-life-affirming elements. Thor was on the planet Pangoria when this happened, and was told the issues at stake were “too great for even an immortal to grasp”.

Due to their imposing presence, all-concealing armor, and seeming indifference/omnipotence to those whom they judge, the Celestials have acquired the sobriquet of “Space Gods” used by many star-faring races. On their last evaluatory visit to Earth-616 in the Fourth Host, the Celestials wiped all memory of their existence from most of humanity. The only entities remaining aware of the Celestials’ existence were the Asgardians, who actively opposed the Celestials’ unrevealed motives; the other pantheons; and Earth’s Eternals and Deviants. In modern times, however, with the rise of superhumans, many superheroes rediscovered the existence of the Celestials.