Thanos takes the Time Stone from The Gardner. (Thanos Quest)

The Thanos Quest is a two-issue comic book limited series published in September and October 1990 by Marvel Comics. The series was written by Jim Starlin, and drawn by Ron Lim.

Recently resurrected by Death in order to wipe out half of the population of the universe, the Titan Thanos discovers the true nature of the six Infinity Gems after gazing into Death’s Infinity Well. Convincing Death that possession of the gems will aid him tremendously in his quest, he gains her permission to seek them out from the cosmic entities that currently possess them. 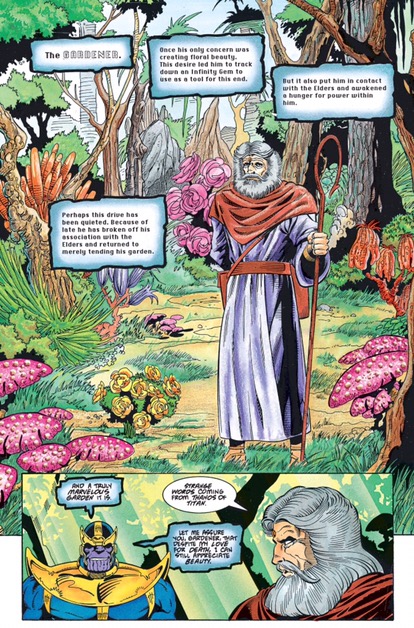 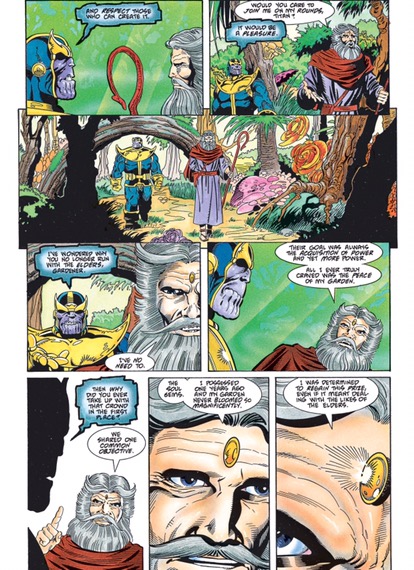 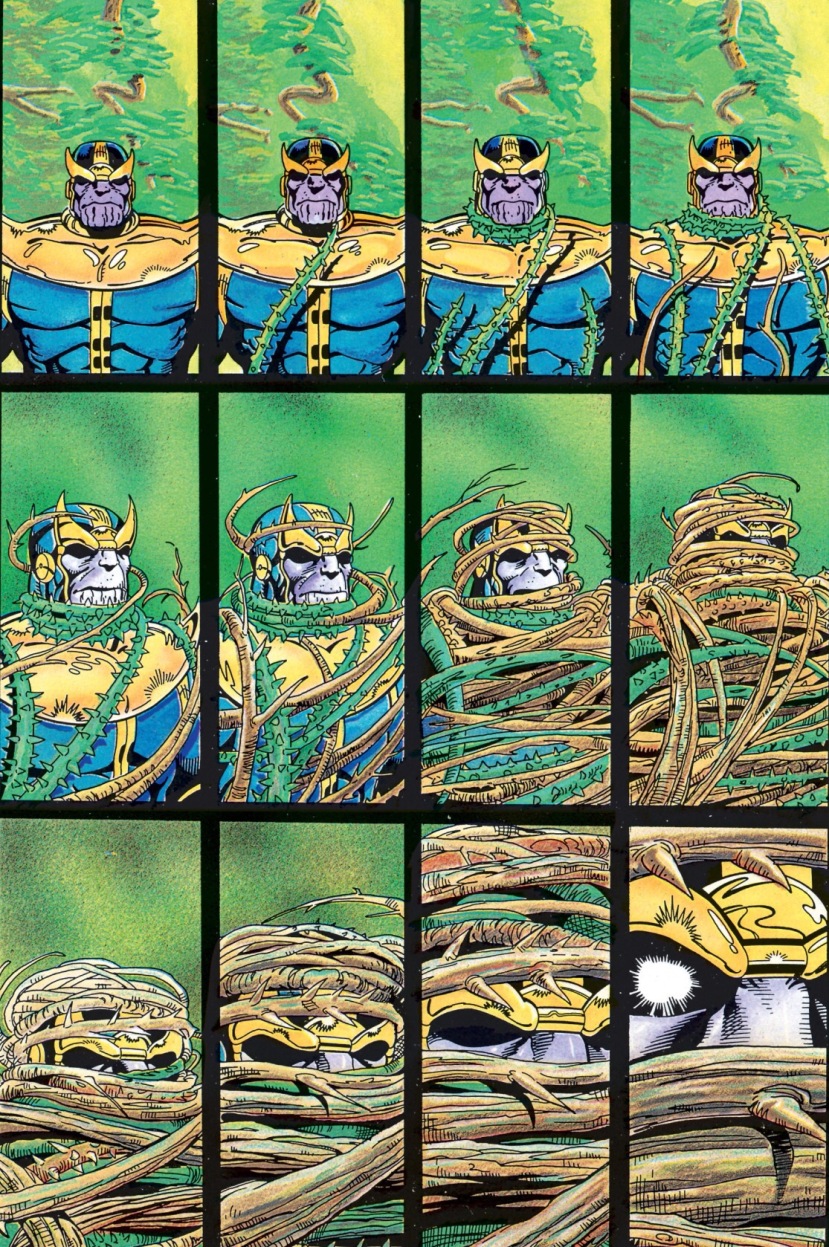 The Gardener was once Ord Zyonz, a being who came into existence in the Seyfert Galaxy M-77. Like all the other Elders, he belongs to one of the first races to develop since the Big Bang and thus is nearly immortal and extremely powerful. He is absolutely obsessed with peace and quiet, and with his garden.

At one time he created an amazing lush garden in the Blue Area of the Moon using his Infinity Gem, the Time Gem. This was eventually brought to a halt when Adam Warlock,Spider-Man and the Stranger were caught up in a battle on the moon and he used his gem along with the Soul Gem of Warlock and successfully slowed down the Stranger enough to make him leave. After using his gem in battle it was corrupted and he believed he could no longer use it to make things grow; he left it behind in search of a new place for his garden (where it stayed until Thanos found it).

The Gardener was later revealed to possess Adam Warlock’s Soul Gem. He journeyed to K’ai to create a paradise valley. There, he battled the Hulk, and briefly lost the gem, but he soon had it in his possession again.

The cosmic entity Grandmaster had, by proxy, lost a contest for the entity Death. Angered, she forbade him and his fellow Elders, including the Gardener, from entering her realm. Thus the Gardener became immortal.

The Gardener was seen among a group of abstract and near-omnipotent beings (including Uatu the Watcher, Eternity, the In-Betweener, the Living Tribunal, Lord Chaos, Master Order, and a Celestial) confronting the Beyonder.

The Gardener was one of the eleven Elders who allied together to restart the universe by killing Galactus.  He used Earth plants to capture Mantis. He battled Galactus and theSilver Surfer, but was converted to energy and consumed by Galactus. Along with the other four Elders who were devoured by Galactus, he caused Galactus “cosmic indigestion” from within until they were forced out of him by Master Order and Lord Chaos. The Gardener was one of the four Elders who aided the Silver Surfer and Nova in helping Galactus to defeat the In-Betweener.  Once that was done the five Elders used their Infinity Gems to instantaneously travel very far away from Galactus and his vengeance. Afterwards, the Gardener retained possession of the Time Gem and used it once more. Thanos confronted him, using the Gems he had already recollected to seemingly kill the Gardener and take the Time Gem, as part of his ultimate goal to create the Infinity Gauntlet.

Later, during the Infinity War incident, the Contemplator spotted the Gardener in the Dimension Of Manifestations among a group of abstract and near-omnipotent beings who were conversing with the Beyonder. However, that was only a “reflection” (recording) of a manifestation-event that had taken place years earlier (and which is listed above).