Ahh it feels good to be posting about The Odinson once again. Thor and Beta Ray Bill are my two favorite characters in the Marvel Universe and I’m glad they are reunited in The Unworthy Thor. For those who haven’t been following, The Unworthy Thor picks up after the death of The Watcher and the events of Secret Wars 3. Thor was rendered “unworthy” by a yet-still-undisclosed whisper from Nick Fury. Thor dropped the mystic hammer Mjolnir on the Moon and was unable to pick it up. However Jane Foster, who was dying from cancer, was able to pick up the sacred weapon thus becoming the female version of The Mighty Thor. Battling with his axe Jarnbjorn and trusty war-goats Toothgnasher and Toothgrinder against the rock troll Ulik on the moon, the Odinson receives a tip from a mysterious stranger known as The Unseen that “another” Mjolnir is present in this dimension.

This run marks the return of Olivier Coipel to the series who in my opinion is one of the best artists working today and my favorite Thor artist since Walt Simonson. If you haven’t already, do yourself a favor and pick up his run of Thor (2010) with writer J. Michael Stracznski. (and Spider-Verse, and AvX) The writer is Jason Aaron who wrote, X-Men Schism, Avengers vs. X-Men (Co-written with Brian Michael Bendis) and one of my all-time favorite Wolverine one-shots; The Man in the Pit. The Unworthy Thor is definitely worth your time.

The Story so far…

On the day Thor Odinson learned a long-kept secret stolen from The Watcher, he dropped the mystic hammer Mjolnir to the surface of the moon. Try as he might, Thor could not lift his once-faithful weapon. Unable to possess the power of his birthright, the thunder god relinquished the name of Thor and now simply calls himself Odinson. Now he searches for redemption, but until he finds it, he will remain….

When the being known as The Unseen alerted him to the existence of another hammer on old Asgard, Odinson raced to the ruins of his former home, but found the entire realm missing. Fortunately his old friend, Beta Ray Bill knew who had stolen it: The Collector. Outmatched, the pair were captured and imprisoned.

But The Collector isn’t the only one after the hammer. Aided by a mysterious ally, the imprisoned Thanos unleashed his lackeys – Black Swan and Proxima Midnight – on The Collectors ship. Meanwhile, Odinson and Beta Ray Bill broke out and freed the murderous Hel-Hound Thori and Odinson’s trusty steed Toothgnasher.

After mistakenly targeting Stormbreaker, Beta Ray Bill’s hammer, Thanos’ servants confronted The Collector and battled for the possession of the Ultimate Thor’s hammer. But Odinson and his friends are coming for them… 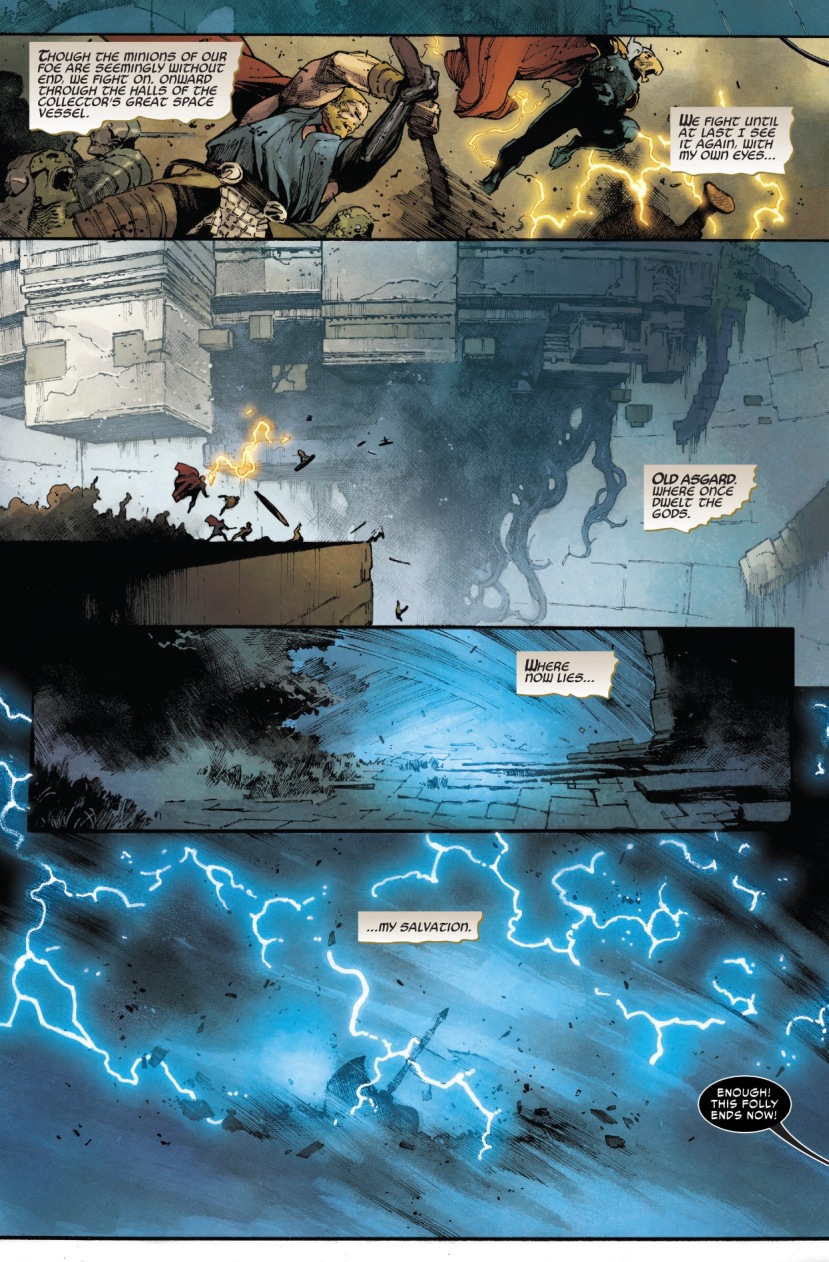 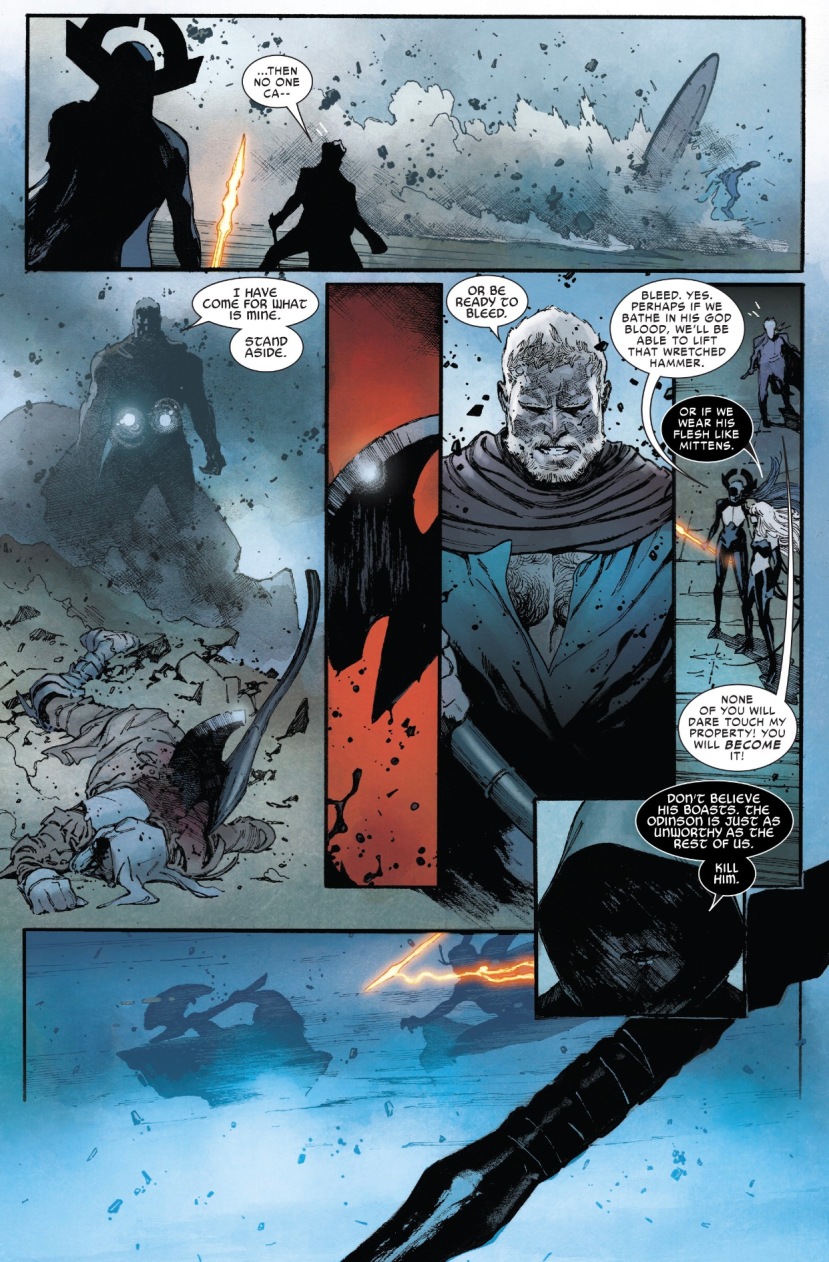 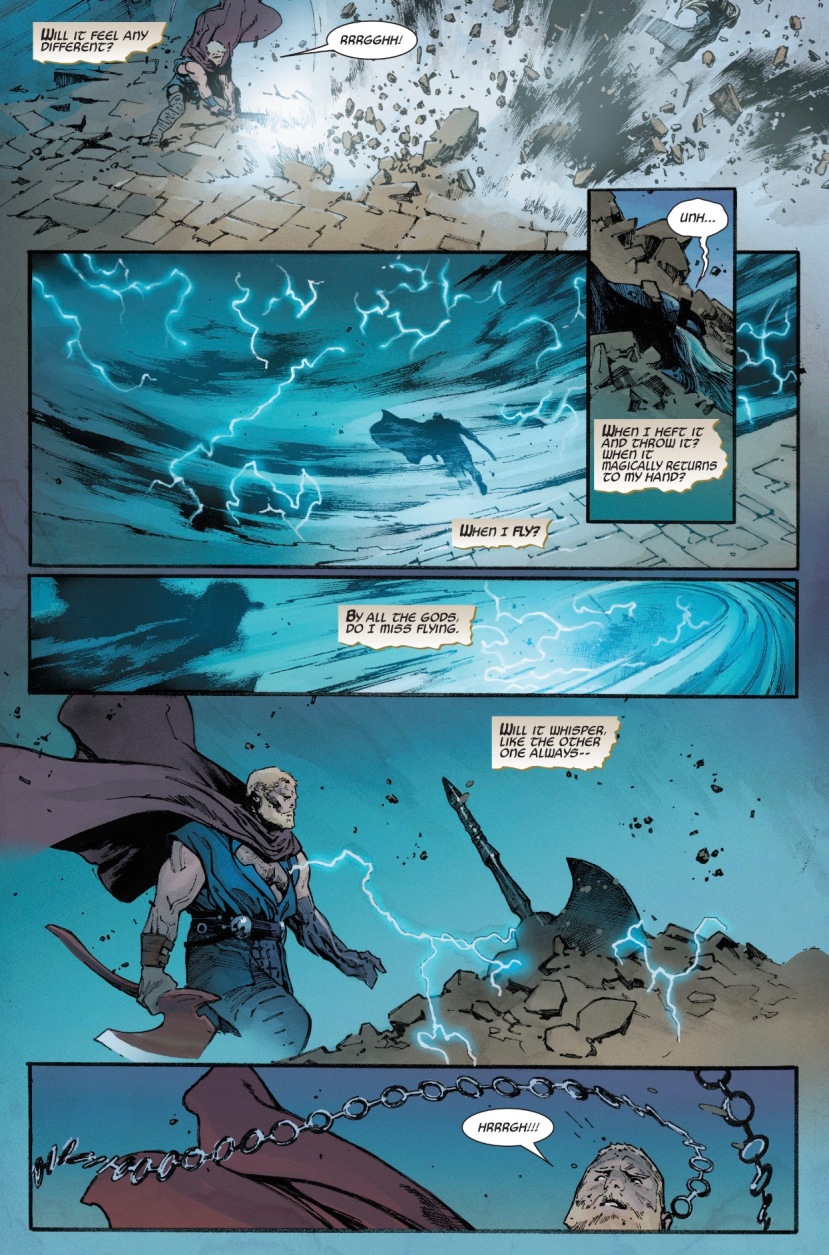 From: The Unworthy Thor #4