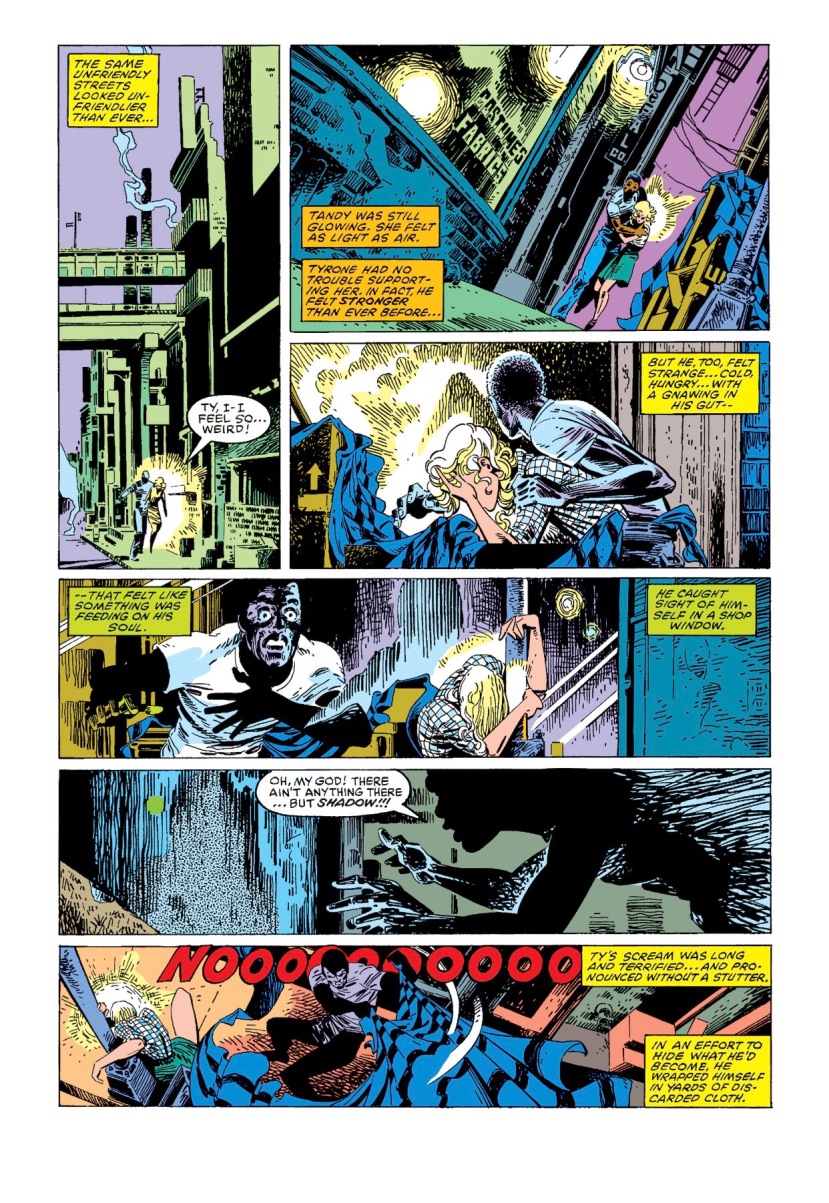 Tyrone “Ty” Johnson (Cloak) and Tandy Bowen (Dagger) met in New York City as runaways. Tyrone was a 17-year-old boy from Boston, Massachusetts with a debilitating stutter and ran away to New York City when his speech impediment prevented him from stopping his friend from being shot by police, who mistakenly believed he had just robbed a store. Tandy was a 16-year-old girl from a privileged upbringing (born in Shaker Heights, Ohio) who ran away because her multi-millionaire supermodel mother was too busy with her career and social life to spend time with her daughter. When they met, Tyrone considered stealing Tandy’s purse, but before he could, a thief stole the purse and Tyrone retrieved it for her.

Afterwards, they had dinner and became fast friends. When naïve Tandy accepted an offer of shelter from some strange men, wary Tyrone went along to protect her. The two teens were soon forcibly delivered to criminal chemist Simon Marshall developing a new synthetic heroin for Silvermane and the Maggia, testing it on runaway teens with fatal results. Johnson and Bowen somehow survived injections of the drug, and they fled.

During their escape, the drug turned them into superpowered beings Tyrone found himself engulfed in darkness and seized by a strange hunger which eased in the presence of Tandy glowing with a brilliant light. Trying to hide his newly shadowy appearance in a makeshift cloak, Tyrone began absorbing Marshall’s thugs into his darkness while Tandy struck them down with daggers of light. The two teens dubbed themselves “Cloak & Dagger” and declared war on drug crime in combating drug-dealers and helping runaway children.

At the end of this first issue you get a good sense of Cloak and Daggers power set. Dagger displays Olympic level gymnastics skills by jumping over a charging thug, evading gunfire and taking out a room full of armed men. And Cloak shows off his dark force by sucking in the bad guys and terrorizing their souls.

Another important scene shows that Tandy’s light has a pleasing effect on Tyrone, calming him and keeping the dark dimension at bay.