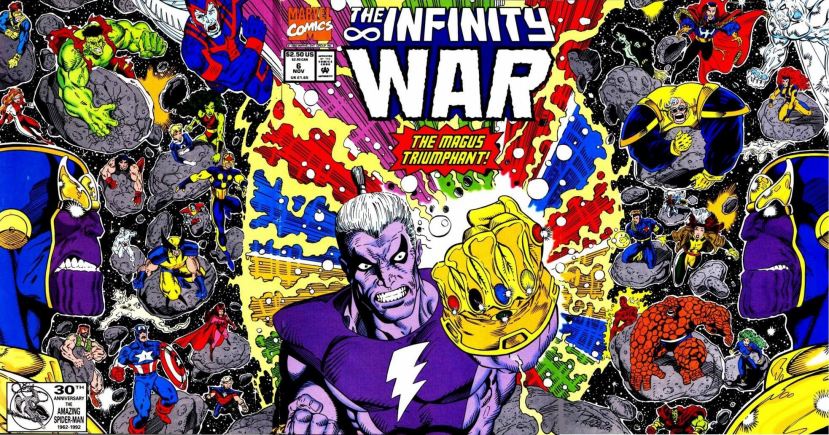 The Infinity War was a six issue mini series, crossing into numerous other series, including Captain America, Daredevil, Fantastic Four, Spider-Man, and even the comedy series What The…?!

The Magus develops a plan to gain absolute power over the Marvel Universe. Operating out a far-off reality, he acquires “cosmic containment units”, items similar to the Cosmic Cube, along with demonic doppelgangers of Earth’s heroes and villains. The Magus’ power renders Eternity catatonic and keeps himself well hidden. After a confrontation with Magus, Thanos sought help from Warlock’s Infinity Watch.

The Magus sends doppelgangers after some of Earth’s heroes. Reed Richards and Iron Man are defeated and replaced. Reed’s double assembles many of Earth’s heroes, intending to destroy them with a gamma bomb. His plan fails, thanks to the heightened senses of Wolverine and Daredevil, as well as Invisible Woman’s force fields. Another confrontation with Thanos led to further confusion and general chaos.

The heroes decide to split their forces, with a team remaining on Earth while another team travels to the far reaches of space. The Earth team is again attacked by doppelgangers, many heroes are subsumed and taken over. The traveling heroes fight with Thanos and the Infinity Watch, believing them to be the enemy.

Galactus arrives to join in the efforts against the Magus. It is decided that the Infinity Gauntlet would help, but the Gauntlet has been rendered powerless by The Living Tribunal, at the request of Eternity. Galactus and the warrior-woman Gamora leave in an effort to revive Eternity and reactivate the Gauntlet. Just after they leave, Warlock and the glove itself are kidnapped by Magus and the Thanos duplicate. The original Thanos then sends Quasar on a mission to destroy the Magus using the Ultimate Nullifier.

Doctor Doom and his ally Kang, both of whom plan to betray the other, invade Magus’ stronghold and damage the control console for the Cosmic Cubes. The Magus races to the Cubes to use them directly, only to find them stolen. He falls victim to an attack by Doom, who demands that the Magus turn over the Gauntlet. Just then, Galactus succeeds in his attempt to reactivate the Gauntlet. The Magus swiftly becomes omnipotent, imprisoning Doctor Doom and nullifying Quasar from existence.

The remaining heroes stormed Magus’ fortress as a distraction, fighting an army of doppelgangers. Many fell and are absorbed. Thanos, in a reversal, absorbs his own double and then attacks Magus. The battle ends with Magus as the victor. Adam Warlock confronts Magus, revealing that the Reality Gem in the Gauntlet was a fake. Warlock uses this distraction to re-establish his unique bond with the Infinity Gems and usurp control from Magus. Warlock banishes the Magus to the world within the Soul Gem, living as a spirit unseen and untouched by the other spirits.

The Living Tribunal decrees the Gauntlet can never be used as a unified object again. The cosmic containment units were not to be found at all, seemingly stolen by Warlock’s good half; a female entity later revealed to be The Goddess. She would cause the Infinity Crusade.