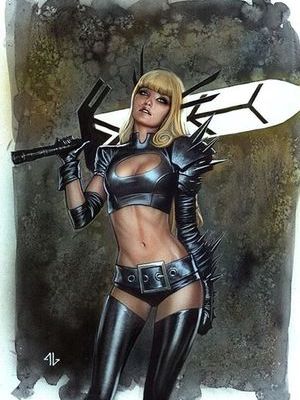 Illyana is called to the Limbo dimension by Belasco, who seeks to bring forth the Elder Gods to rule Earth.  She is raised there, frequently bullied and tormented by Belasco’s underling S’ym.  In order to free himself, Belasco needs to fill the Beatrix Medallion with five bloodstones. The bloodstones are created by corrupting Illyana’s soul, with a new stone appearing as her corruption deepens. She is rescued and tutored in the practice of white magic by that dimension’s version of Storm (who turned to magic when her mutant powers waned). 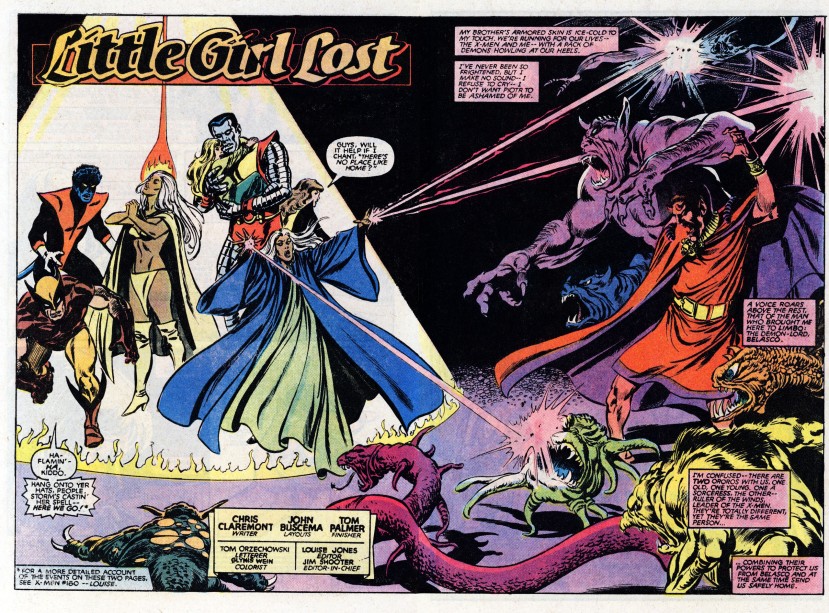 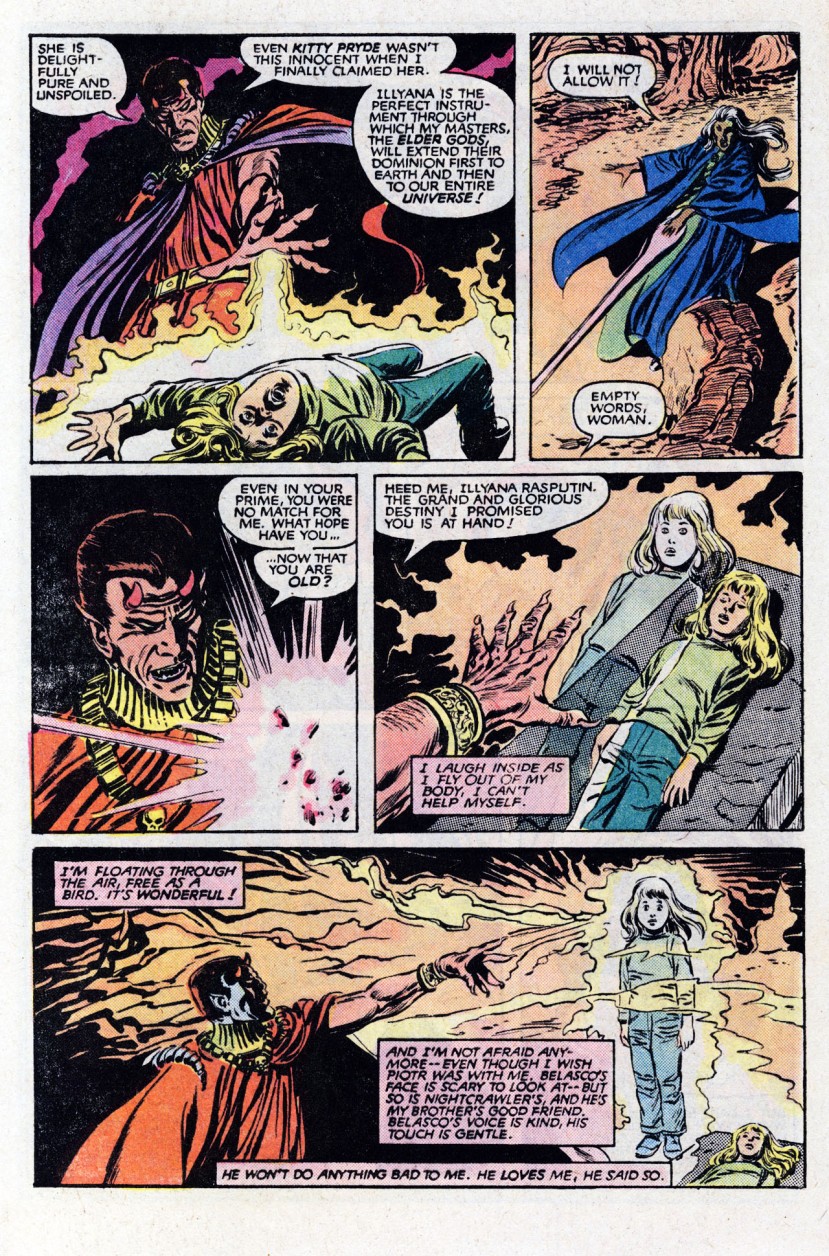 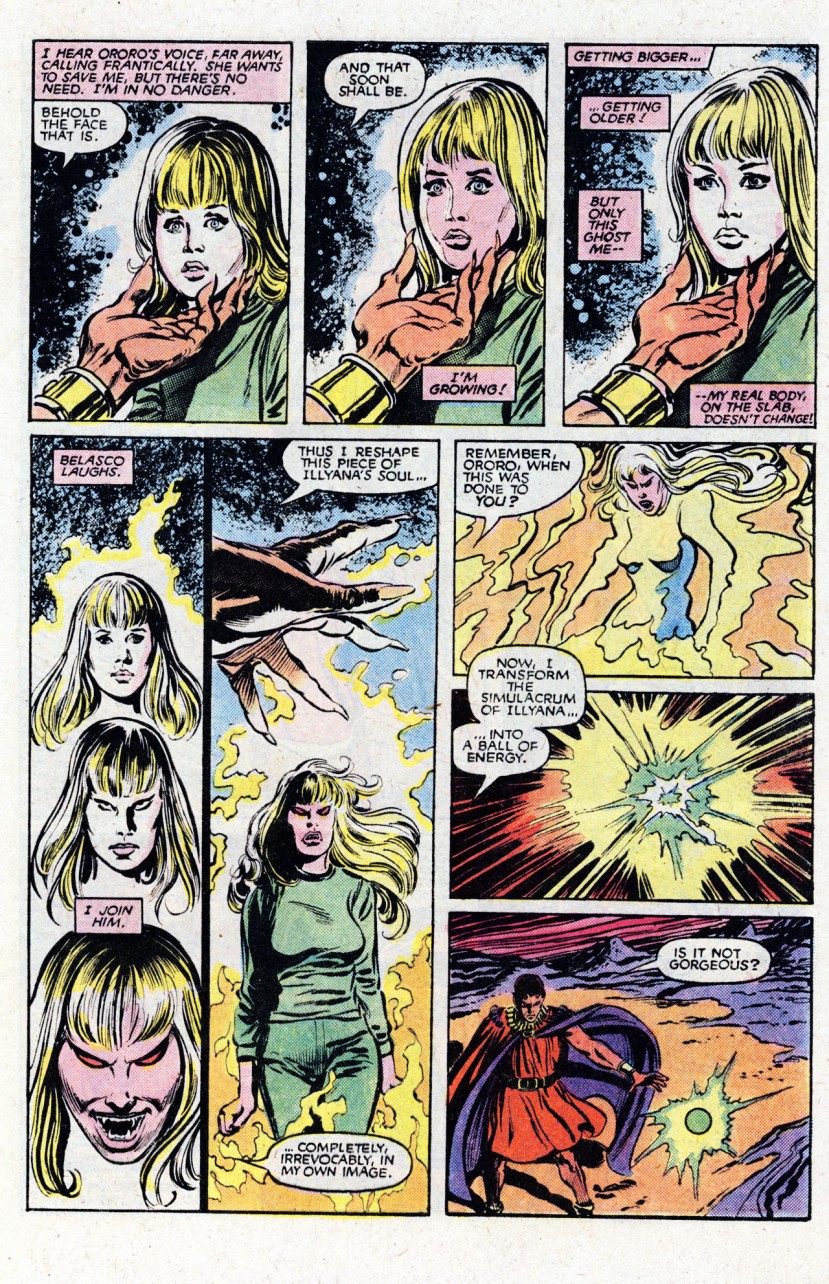 Finding the use of magic abhorrent, Limbo’s version of Shadowcat, known as Cat, kidnaps and trains Illyana in hand to hand and sword combat. Cat, along with Illyana, storms Belasco’s citadel. They are overwhelmed by Belasco who further transforms Cat into a feline demonic creature.  With Illyana back under his control, Belasco instructs her in the art of black magic in the hopes that it will further corrupt her soul. However, Illyana plots Belasco’s defeat and continues to resist the dark influence on her soul.  Illyana forms a mystical bond between both Storm and Cat, who were also tutored by Belasco. 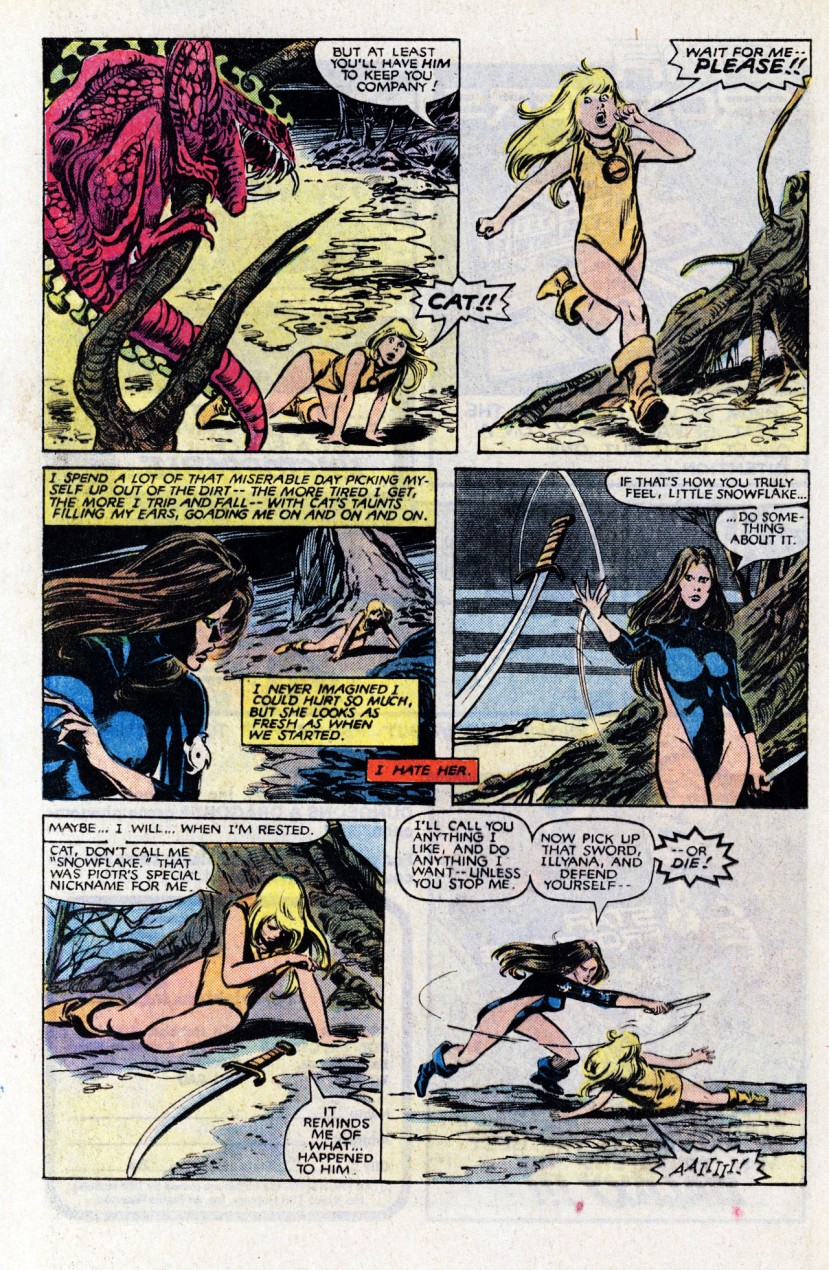 Belasco succeeds in creating three parts of Illyana’s bloodstone pendant. Illyana creates the Soulsword and takes over Limbo as its new ruler.

While wielding the Soulsword she manifests horns, a tail and fangs. She banishes Belasco from Limbo and claims S’ym as her servant. She then returns to Earth a decade older, although no time has passed on Earth since her kidnapping.  She subsequently joins the New Mutants. 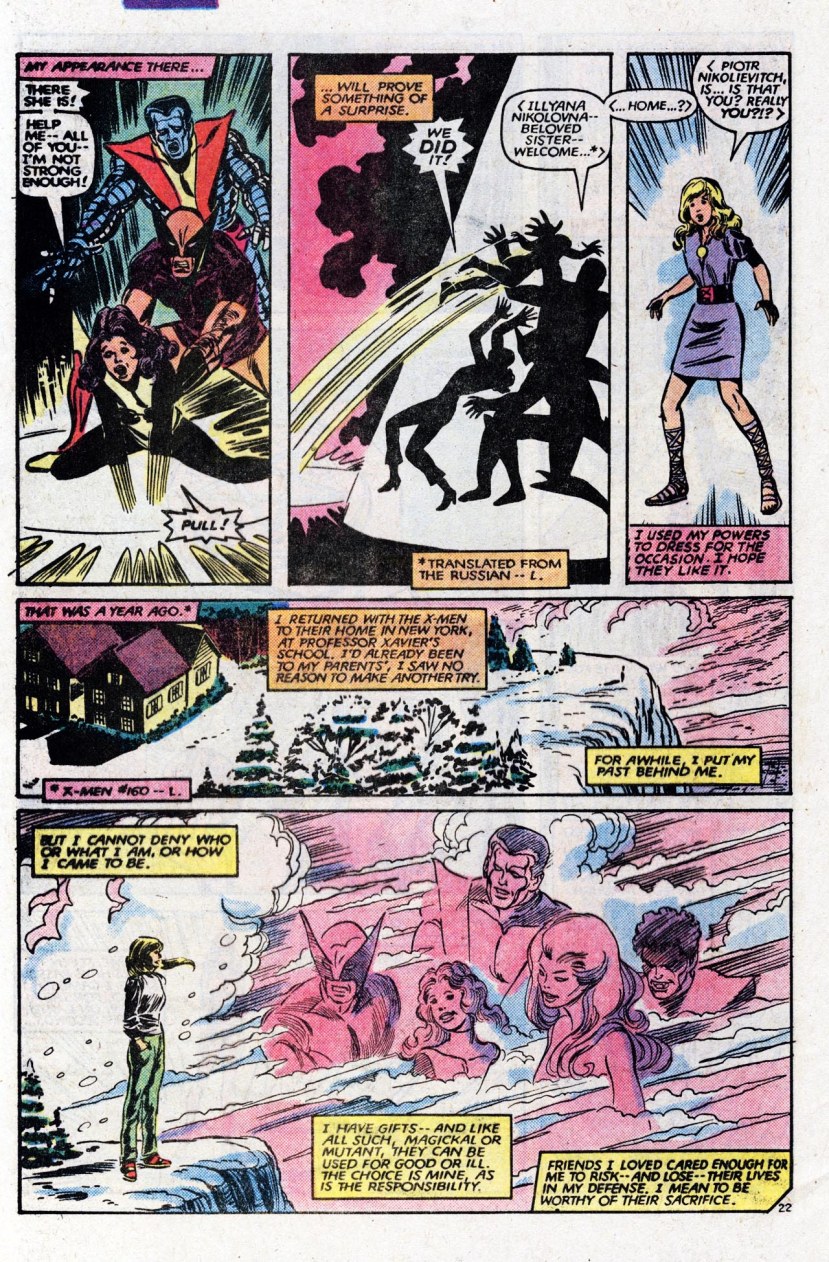 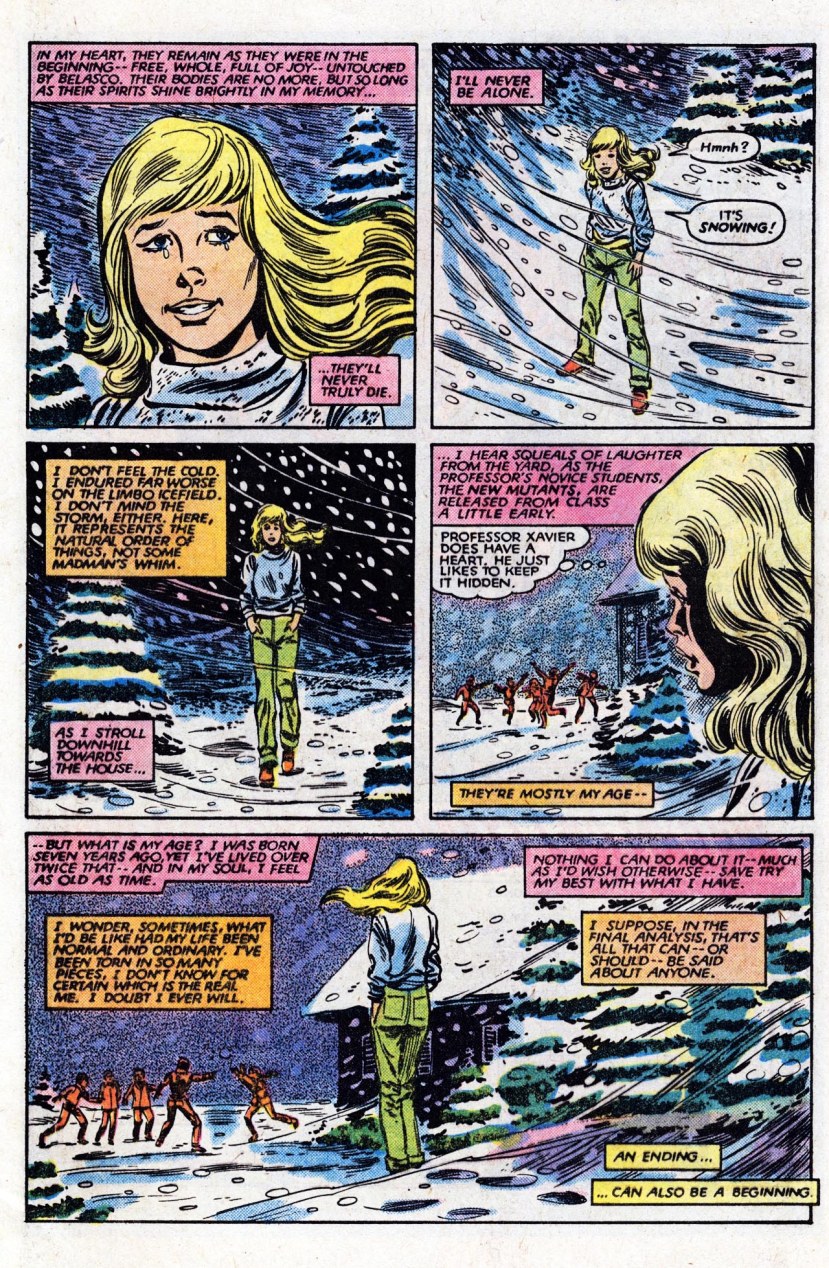 The New Mutants found themselves under the guidance of a new teacher, Magneto. Later, the Beyonder approached Illyana and purged her of her sorcery. Her position as ruler of Limbo was transferred to Kitty. Illyana realized that Kitty could not handle the responsibility and declined the Beyonder’s gift. Angered, the Beyonder killed all of the New Mutants by obliterating them from existence, but later recreated the New Mutants and later used them as henchmen against the heroes attempting to stop him, as they had no memories of the New Mutants. After Beyonder’s defeat, Rachel Summers set everything back.

Warlock’s father, Magus, attacked the New Mutants and Illyana quickly teleported them all to Limbo. Shortly after, Magus also appeared in Limbo and allied himself with S’ym and infected many of Limbo’s other denizens with the Transmode Virus. Illyana tried to destroy Limbo by stabbing her Soulsword into the terrain. As Prof. Xavier was Illyana’s last thought, she emerged in outer space where she was found by Professor Xavier and the Starjammers. She returned to Limbo and reclaimed her Soulsword. She defeated S’ym using tainted magic. Illyana took on aspects of the Darkchylde.

S’ym formed a partnership with Belasco’s former apprentice N’Astirh to sequester his control of Limbo. After arriving in Limbo with the New Mutants, N’Astirh’s magics prevented Illyana from teleporting the New Mutants back to Earth. Illyana and the New Mutants fought S’ym, who had become strong enough to take Illyana’s Soulsword from her. As S’ym attempted to decapitate Illyana, her eldritch armor grew to protect her and she teleported the New Mutants to Belasco’s throne-room, where her tragic past was finally revealed to them. N’astirh pretended to help the team and tricked Illyana into giving in to all her dark urges. She transformed into Darkchylde.
Magik forced her way back to Earth, unaware that N’Astirh would piggy-back her portal and keep it open for demons to rain on Manhattan. N’Astirh kept the portal between Limbo and Earth open by using ten mutant infants he had kidnapped as points of an inverted pentagram. Illyana battled demons who wanted her to embarrass her dark self and N’Astirh, who wanted her as his dark bride. Finally, Illyana’s armor covered her fully. S’ym arrived and Darkchilde battled him until her brother Colossus, who was also fighting the demons in the streets of New York, arrived and rescued her. Piotr was shocked to see his sister in such a state and Illyana was embarrassed and teleported away, taking the New Mutants with her to Limbo. She finally decided to stop running from her responsibilities as the ruler of Limbo. 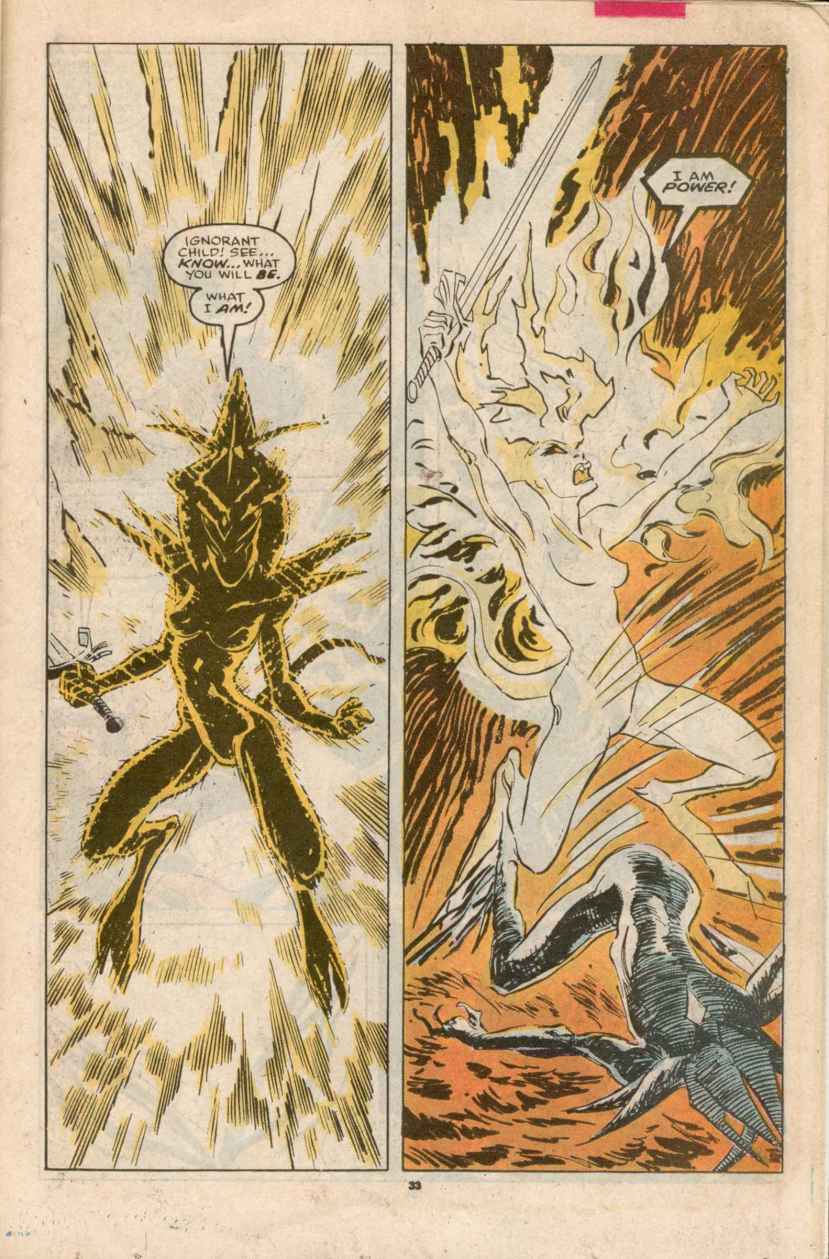 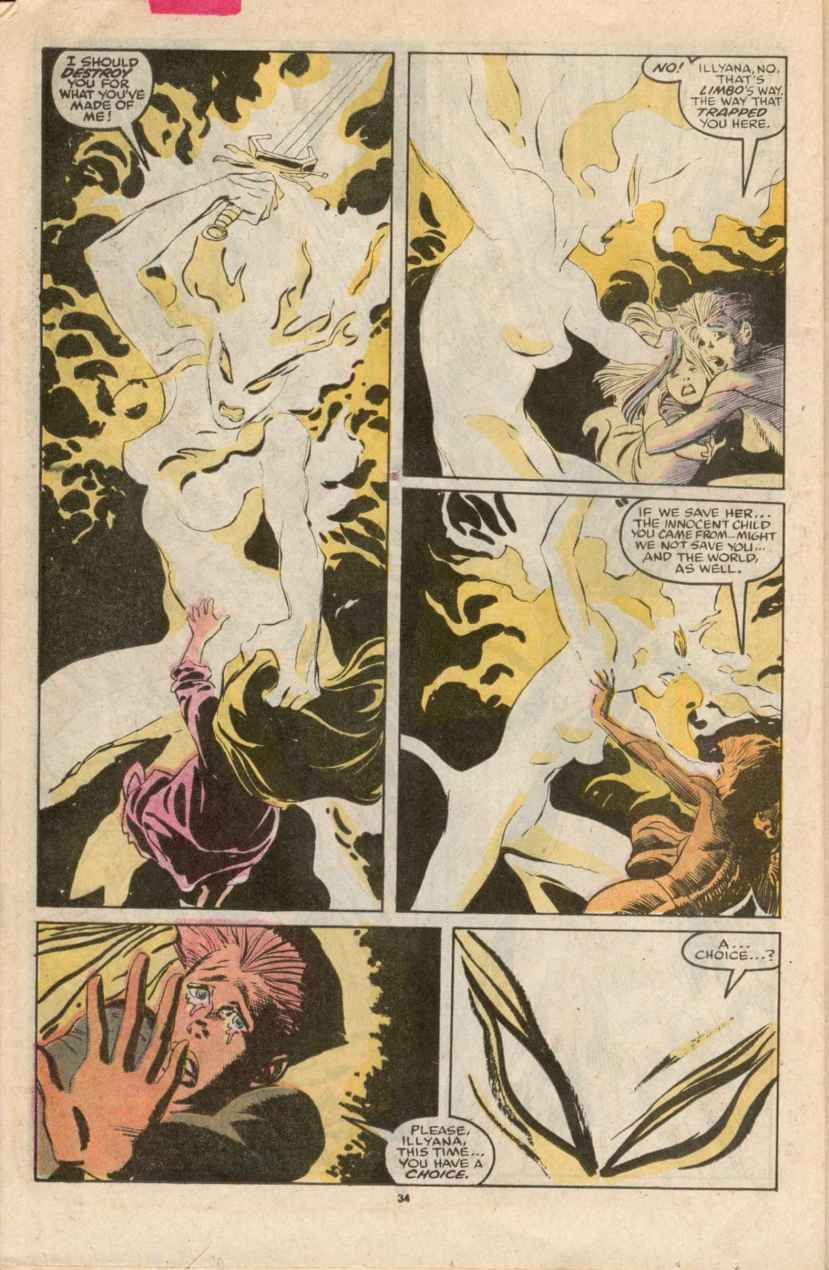 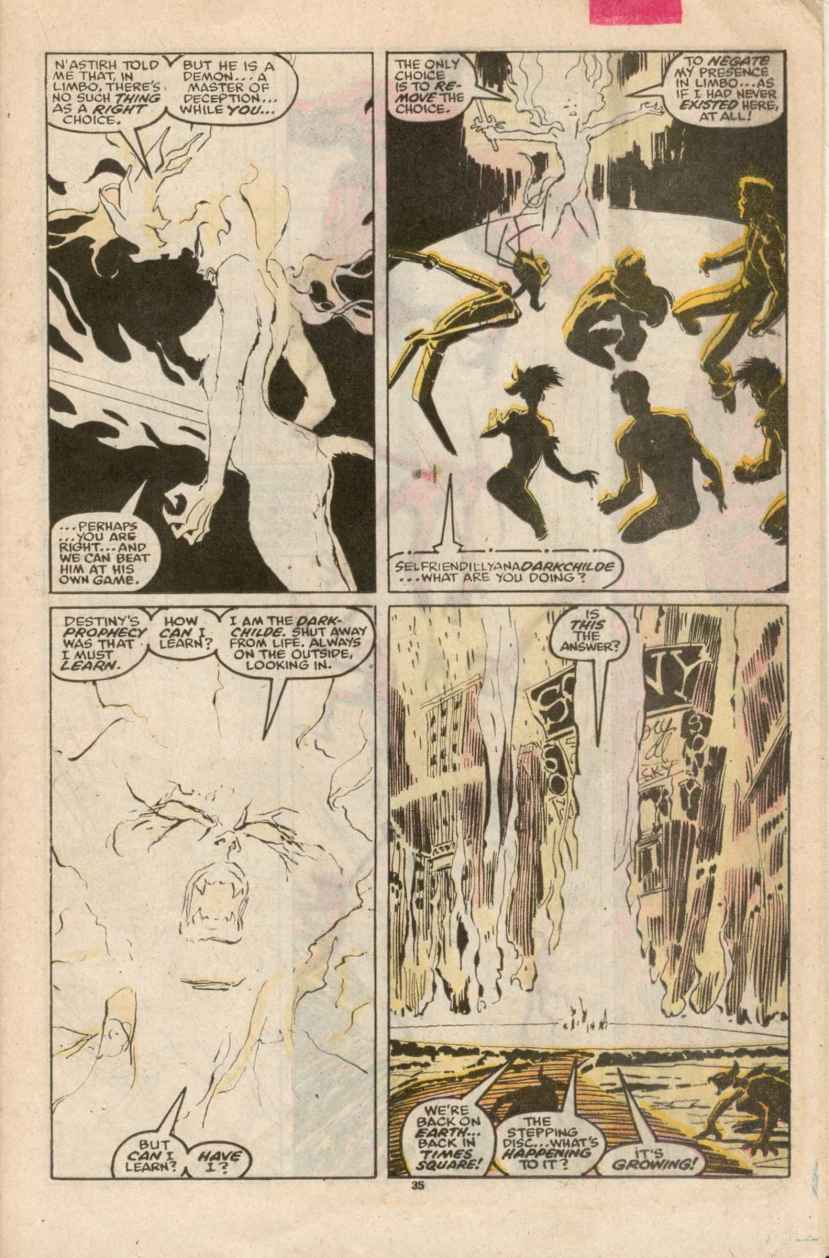 Unwilling to lose her friend and teammate, Wolfsbane, jumped into a teleportation disc and found a younger Illyana and delivered her before the Darkchilde. Darkchilde emerged from her armor and began to glow of pure light, attempting to kill her younger self, but Rahne Sinclair stopped her, stating that saving the young Illyana would bring peace to the older Darkchilde. Darkchilde found a way to stop Inferno, although she knew she risked purging her own existence from the timeline. Darkchilde opened a tremendous portal and sucked all of the remaining demons back to Limbo. Burning so bright with energy that it hurt to look at her, the Lightchilde hurled her Soulsword into the air and the demons were gone, leaving only the charred remains of her eldritch armor.

Colossus cradled the badly damaged armor and heard someone call his name from inside. Opening the armor, Colossus found the younger Illyana. Due to the manipulation of her own past, Illyana’s “Magik” self had not existed. The new version could not speak English. The original Illyana’s Souldsword and eldritch armor magically came into Shadowcat’s possession. New Mutants returned the young Illyana home to the original Illyana’s parents. 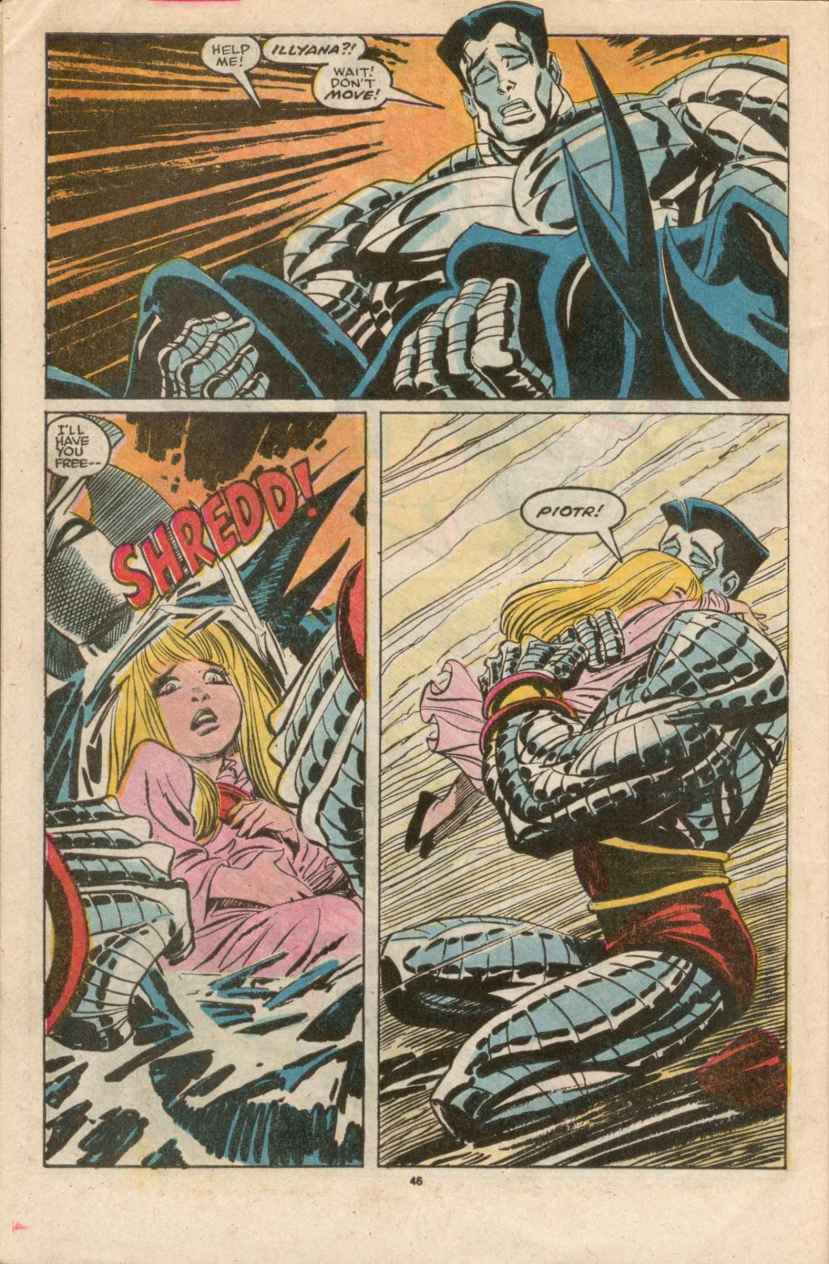 Fast forwarding to after the events of Avengers vs. X-men, Magik joins Cyclops team of X-Men at the New Xavier School at the old Weapon X facility.   The Phoenix has damaged Magik’s powers, like it did to the other five; Illyana initially thinks her ability to channel increased energies from Limbo is a power upgrade, but Dormmamu pulls her into Limbo, and demonstrates that her newfound ability to effortlessly summon Limbo energies is destroying Limbo.

Dormmamu later pulls the entire Uncanny team into Limbo, intending to kill them in front of Magik before he kills her. They fight back and Illyana absorbs all of Limbo’s mystic energy, causing it and its creatures to disappear. She sends the X-Men back to earth, and travels back through time to become the protégé of a past version of Dr. Strange, explaining that she needs a greater understanding of magic, so as to better control her mutant powers. 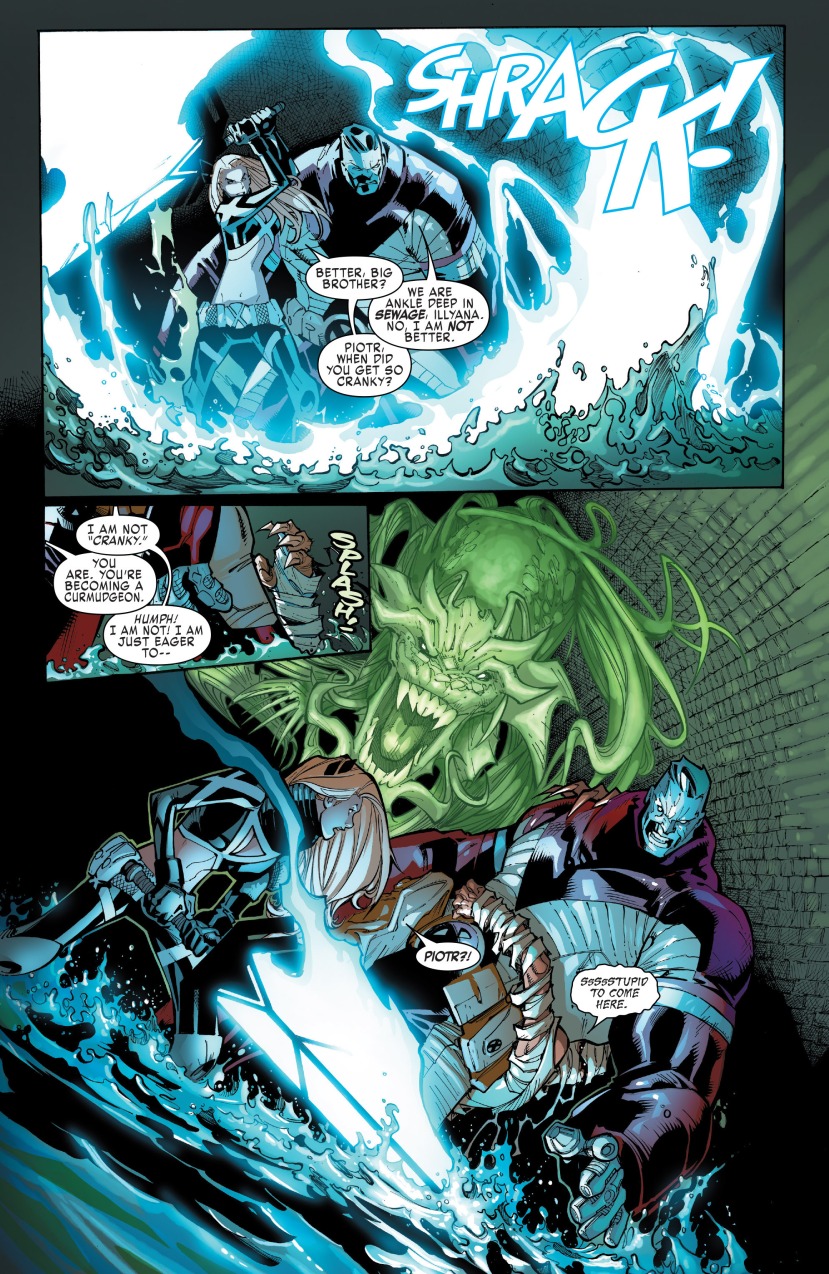