SYNOPSIS:  AN EARTHQUAKE LEAVES KARA HELPLESS WITHOUT HER POWERS, AS SHE ATTEMPTS TO HELP JAMES AND WINN.  THE EARTHQUAKE ALLOWS THE ALIEN JEMM TO BREAK OUT OF HIS CELL AND FACE OFF AGAINST ALEX AND HANK.  HANK EXPLAINS WHAT HAPPENED TO HER FATHER, JEREMIAH DANVERS AND DETAILS ABOUT HIS OWN LIFE.

Supergirl is getting better.

This week shows us a depowered girl of steel who is struggling with her fleeting mortality.  In the last episode, “Red Faced”, Kara uses her solar flare ability to destroy the military’s rouge “Red Tornado” combat cyborg.

The “Solar Flare” is a fairly new ability to both Superman and Supergirl.  It is an immediate and violent expulsion of all the stored solar energy in the Kryptonian cells.  The flare is released in one big burst leaving the Kryptonian, as Maxwell Lord says in this episode, “a dead battery”.  Superman/Supergirl are rendered “human” for a period of  48 hours. (or less, depending on how much energy was expended)  Until their cells can restock their spent solar energy, they are susceptible to sickness, injury, hunger and even death.  They can even get drunk. (see below) 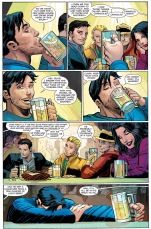 This is the position we find Supergirl in from the beginning of the episode.  She’s got the sniffles, the ouchies and is an overall sad sack.  Back at Mother Base, excuse me, DEO HQ, Hank and Alex are beginning the containment unit scrub down procedure of a particularly nasty baddie, Jemm.  In addition to looking like the world’s biggest asshat, Jemm can also control minds.  I think I’m just gonna call him Asshat from now on. 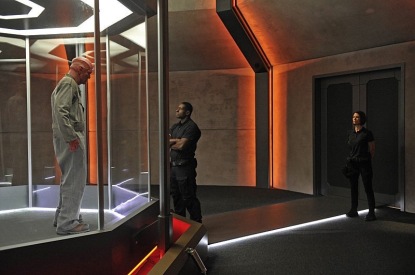 I came to clean your cell Asshat. 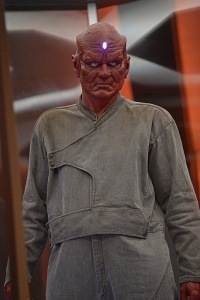 That’s Mr. Asshat to you.

Just before the cell scrub down can start an earthquake rocks National City, cracking streets, destroying buildings and sending people into a panic.  In the ensuing panic, Kara breaks her arm after being shoved out of the way by James Olsen, who then uses the opportunity to de-shirt himself in the most awkward manner possible to make a sling.  I literally laughed out loud at that part and my fiancé, who was in another room across the hall NOT watching Supergirl called out, “Somebody just took off their shirt didn’t they?  Your laugh had a ‘B’ in front of it.”  (Translation: BWAHAHAHAHAHAHAHAH)  I know they are trying to turn Mechad Brooks into a teen heartthrob to maintain ratings, but this was so forced, awkward and predictable, I wouldn’t have been surprised if they started making out right there in the middle of the disaster.  They did it in Man of Steel right?  I did say this show is getting better didn’t I?

It’s getting better because in this episode we see Kara actually become a hero and do it not by punching something until it breaks.  She’s unable to use her powers to save a man with massive internal bleeding and experiences human frailty and mortality up close.  She breaks up an attempted robbery and despite being depowered, a broken arm and having a gun shoved in her face talks the robber out of shooting up the place all by using the power of her personality and the big giant ‘S’ on her chest.  She was probably successful because nobody wants to shoot a hot blonde in the face, but hey, I’ll take some character development over none at all.

Back at Mother Base, Asshat is running amok and Henshaw is in pursuit. The next few beats are standard action movie fare: Alex watches the assault teams sweep the compound/first person body cameras crackle out/life signs go dead (see: Aliens, Jurassic World) / Alex disobeys orders and follows Henshaw/Alex gets her partner either killed or mind-boned by Jemm/ Alex corners Henshaw in a server room.

In the server room with Henshaw, instead of formulating a plan to FIRST stop Asshat from mind-boning the entire place, Alex chains him to a blinky machine and tries to force him at gunpoint to tell the truth about her father.  Unsatisfied by his answers, Alex runs out of the room, turns into Jack Bauer and guns down Jemm.  No seriously, she finds this dude and SHOTGUNS HIM RIGHT IN HIS STUPID ALIEN FACE.  Right before Alex can capture Asshat, he turns the tables and slaps the shit out of her knocking her across the room.

Then the show drops the bomb.

Henshaw reveals that he is not actually Hank Henshaw and that the real man died the same day as Alex’s father.  He says that Jeremiah Danvers and Hank Henshaw were perusing an alien being and had him cornered somewhere in Peru.  Henshaw attempted to kill the alien but Danvers intervened instead getting himself killed. The alien killed Hank Henshaw and then made a vow to the dying Danvers that he would watch out for and protect his children, both Alex and Kara as if they are his own.  He says that he is the last surviving member of a race of people from the planet Mars and reveals his true name and visage:

There you have it folks!  We now live in a world where a live action Martian Manhunter is on TV.

Told ya, this show is getting good.