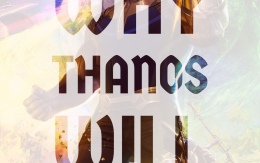 Henry “Hank” Pym, is an American biochemist with extensive knowledge in various scientific fields, married Maria Trovaya, a brave and beautiful young woman who had been a political dissident in her native Hungary, from which she had fled. Naively believing that his American citizenship would protect her, Henry and Maria Pym traveled to Hungary shortly after their marriage. The Pyms were confronted by agents of the secret police there. Henry Pym was knocked unconscious and Maria was murdered. Pym was greatly distraught by his wife’s death, and decided to do whatever he could in the future to battle injustice and inhumanity.

Back in the United States, Pym discovered a rare group of subatomic particles, which have become known as the “Pym Particles.” Pym was able, through the application of magnetic fields, to entrap the particles within two separate serums. One serum would reduce the size of persons and objects, and the other would restore them to their normal size. Pym tested the reducing serum on himself and discovered it was more powerful than he had expected: it reduced him to the size of an insect. Pym became entrapped in an anthill and was pursued by the ants within. He escaped and restored himself to his normal size with his other serum. Deciding that the serums were too dangerous to exist, Pym destroyed both of them.

However, weeks later he reconsidered his decision and began to recreate the serums, whose existence he then kept secret. Inspired by his experience in the anthill, Pym undertook a study of ants, and theorized that ants communicate through psionic / electrical waves transmitted through their antennae. 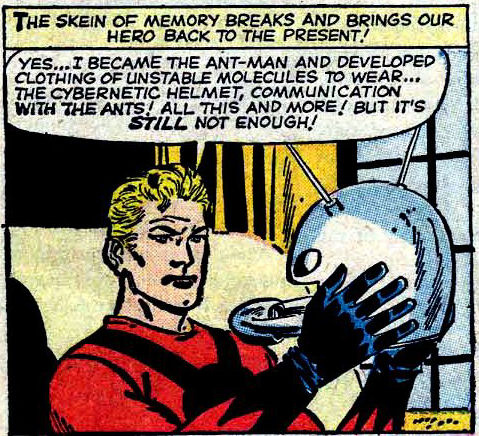 After months of work, Pym succeeded in creating his first “cybernetic helmet,” which would enable him to communicate with the ants through transmitting and receiving psionic / electrical waves. Thinking that someday he might want to use the shrinking potion on himself again, Pym also designed a protective costume for himself, Unstable Molecules and steel mesh.

That same day, however, Pym received an assignment from the government to concoct a gas that would provide people with temporary, limited immunity to radioactivity under certain specific circumstances, based on his previous work. The government also assigned four other scientists to assist him in the project. The KGB, the Soviet Intelligence agency, learned of Pym’s project and sent agents who held Pym and his assistants prisoner in their own laboratory. Only Pym knew the entire formula for the gas they had by now developed, and he refused to tell the Soviet agents. The agents set about searching the laboratory for the formula, intending to kill Pym and his assistants afterward.

Unseen, Pym donned the cybernetic helmet and protective costume and, using his reducing formula, shrank himself to the size of an ant. He escaped to an anthill outside, put a large number of ants under his control through the helmet, and used them to attack the agents and free his men, who then overpowered their assailants. Pym then restored himself to normal size.  Afterwards, in the guise of the Ant-Man, Pym battled various menaces, including Comrade X, the Protector, the criminal scientist Elihas “Egghead” Starr, who was to become Pym’s greatest enemy, as well as the Scarlet Beetle, the Hijacker, the alien Kulla, the Voice and the Time Master.

Hank injects Janet with Pym Particles transforming her into “The Wasp”.

After an alien being from the planet Kosmos killed Pym’s colleague, the scientist Vernon van Dyne, Pym revealed his secret identity of Ant-Man to van Dyne’s daughter Janet, who wished to avenge his death. Pym taught Janet how to use the gas within which he now contained the “Pym Particles,” and which he used to shrink himself in size, and through biochemistry, gave her the ability to grow insect-like wings when she used the gas to shrink herself to insect size. As the Wasp, Janet van Dyne assisted the Ant-Man in finding and defeating the murderous Kosmosian. Pym and van Dyne gradually fell in love; van Dyne reminded Pym of his deceased first wife, Maria. Pym and van Dyne became crime-fighting partners in their costumed identities, fighting menaces like the Egghead, the A-Chiltarians and their robot Cyclops, the trumpet-playing criminal Trago, the Porcupine, the Human Top and the Black Knight (Nathan Garrett). They were two of the founding members of the Avengers and were part of the group that discovered the frozen form of Captain America, bringing the World War II hero into the modern world.

Pym began experimenting with robotics and created a robot with the potential for high intelligence. The robot turned against its creator, hypnotizing Pym and escaping from his laboratory. It later became one of the Avengers’ greatest adversaries under the name of Ultron. Its evil deeds would long plague Pym with guilt, especially since, as he was forced to admit much later, he had used his own brain patterns as the engram basis of Ultron’s robotic mind.

For several years, Pym had been in love with Janet van Dyne, but because of his repressed personality, and her abundant wealth, he resisted marrying her. One day while working in his laboratory, whilst thinking of the fact that he wanted to marry van Dyne but couldn’t, Pym accidentally dropped and smashed some vials containing various unknown gases. The released gases wreaked a radical temporary personality change in Pym, what could be seen as a severe case of schizophrenia. He took the new identity of Yellowjacket, claimed that he had murdered Henry Pym, kidnapped van Dyne, and proposed marriage to her, as Pym had long wanted to do. Realizing that Yellowjacket was really Pym, Van Dyne decided to play along, fearing that she would worsen his psychological condition if she did otherwise.

The Avengers, not suspecting at first, were shocked to hear that she said yes to the proposal. Van Dyne and Pym, as Yellowjacket were married at Avengers Mansion amidst an assembled who’s-who of superheroes active at the time, as well as some villains who were hiding and secretly pretending to be the caterers. Immediately after the marriage, the Avengers were attacked by the Ringmaster and his Circus of Crime. The shock of seeing van Dyne in danger of death (via the Princess’ python), shocked Pym back into his normal personality. The Avengers defeated the Ringmaster and company. Despite the fact that Pym was married under an assumed name, the marriage between Pym and van Dyne was still legal, and Pym and Van Dyne happily agreed to let it stand.

Pym renounced his power to became a giant due to its continuing physical strains, and used the name and costume of Yellowjacket in crime fighting. He spent periods of time with the Avengers and a couple of times with the Defenders as Yellowjacket, and also briefly returned to his Ant-Man persona for a short time (becoming trapped at ant size for a while), but he spent most of his time completely devoted to his scientific research. He gave his blessing to Scott Lang when Lang used his old equipment to become the second Ant-Man. 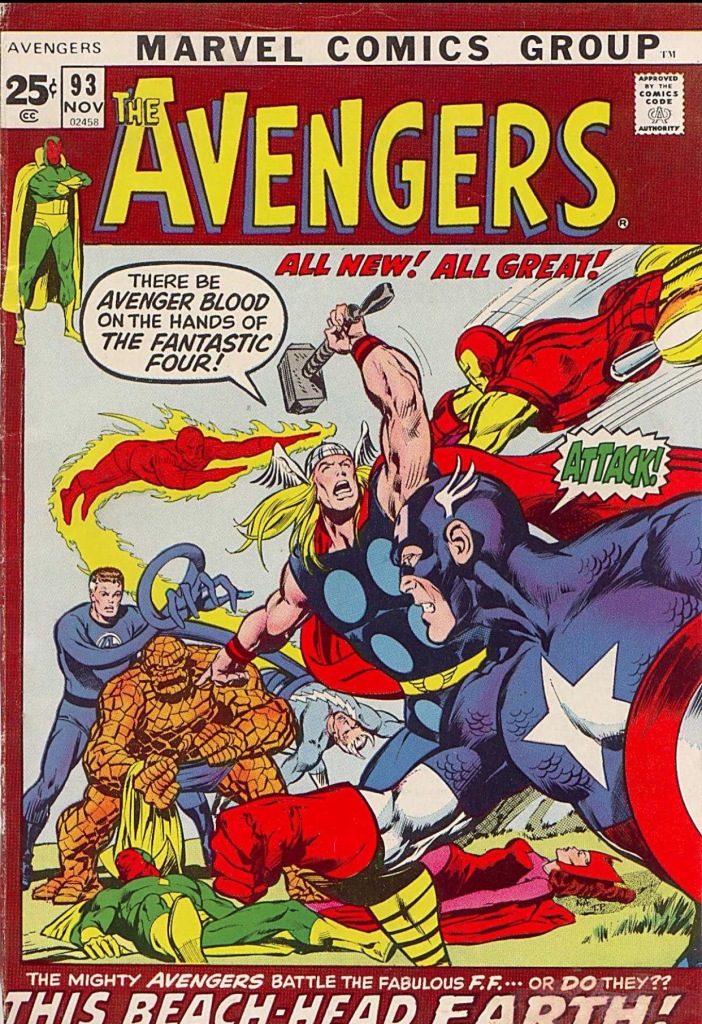 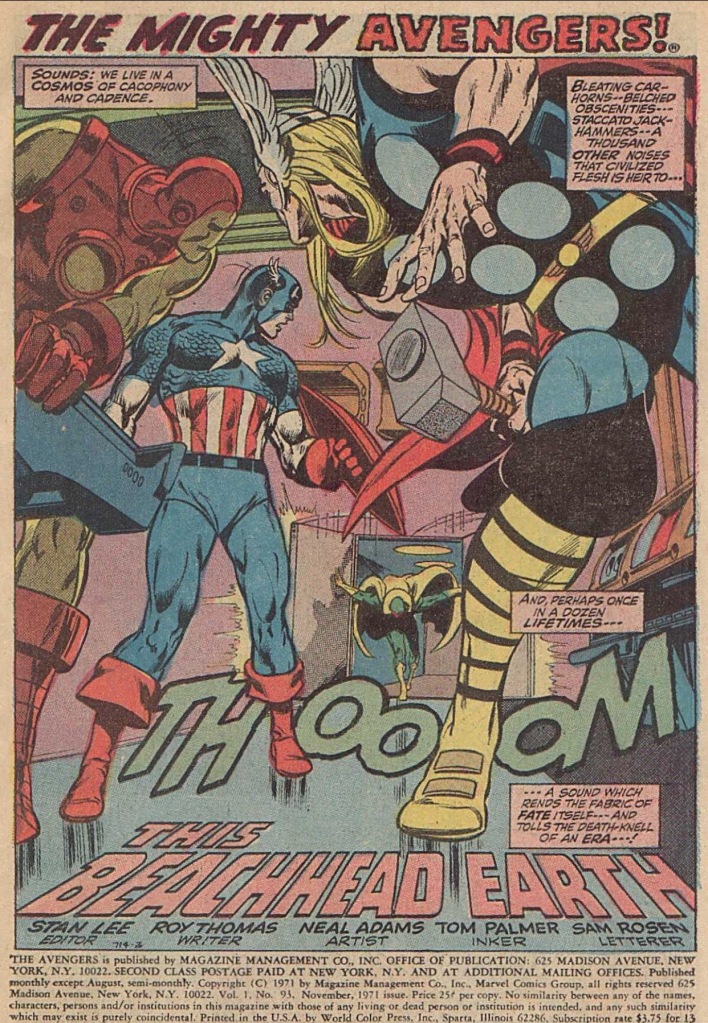 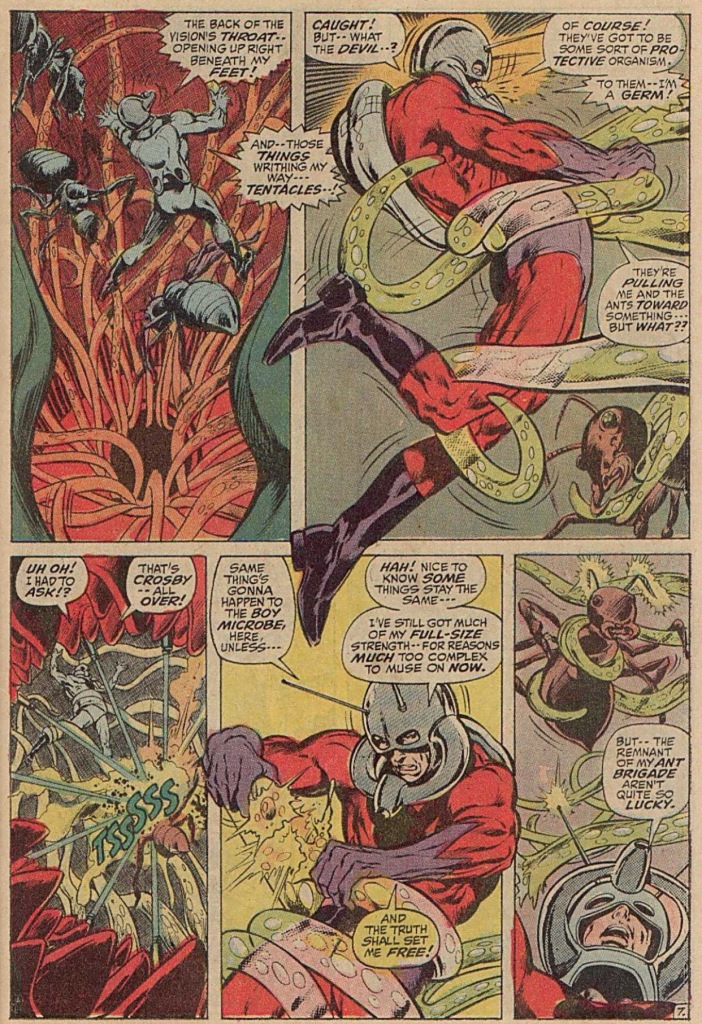 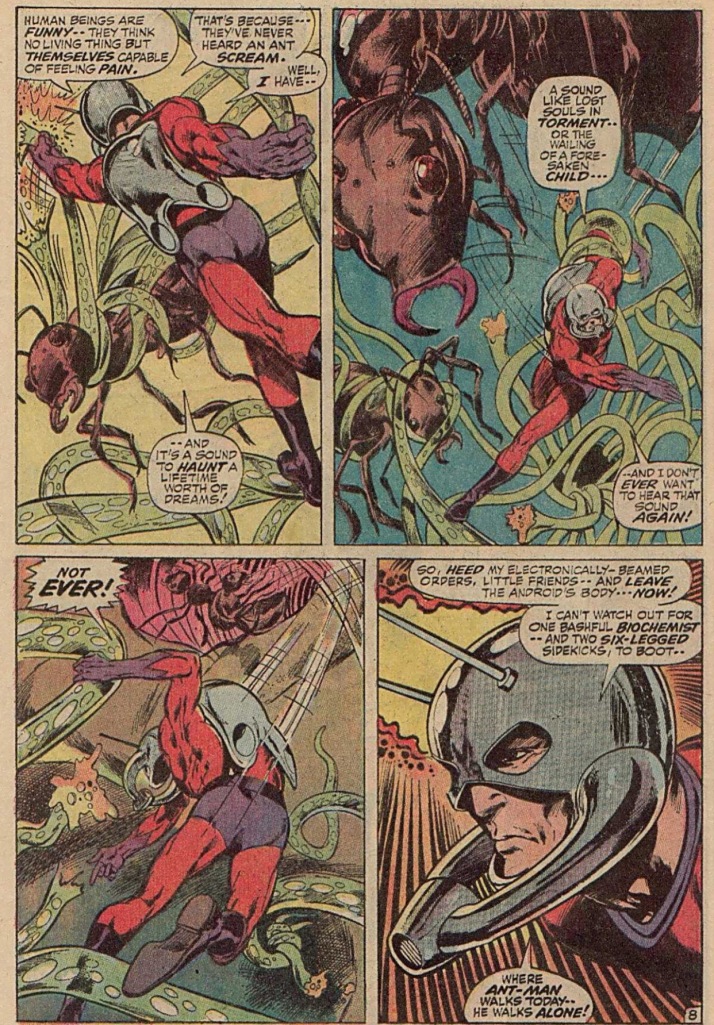 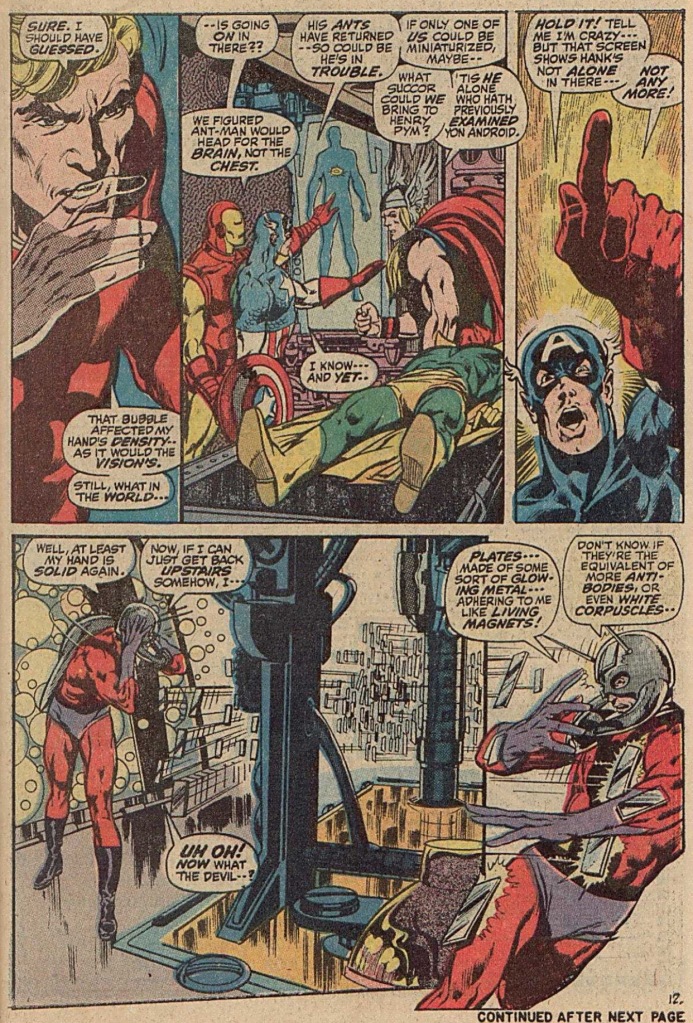 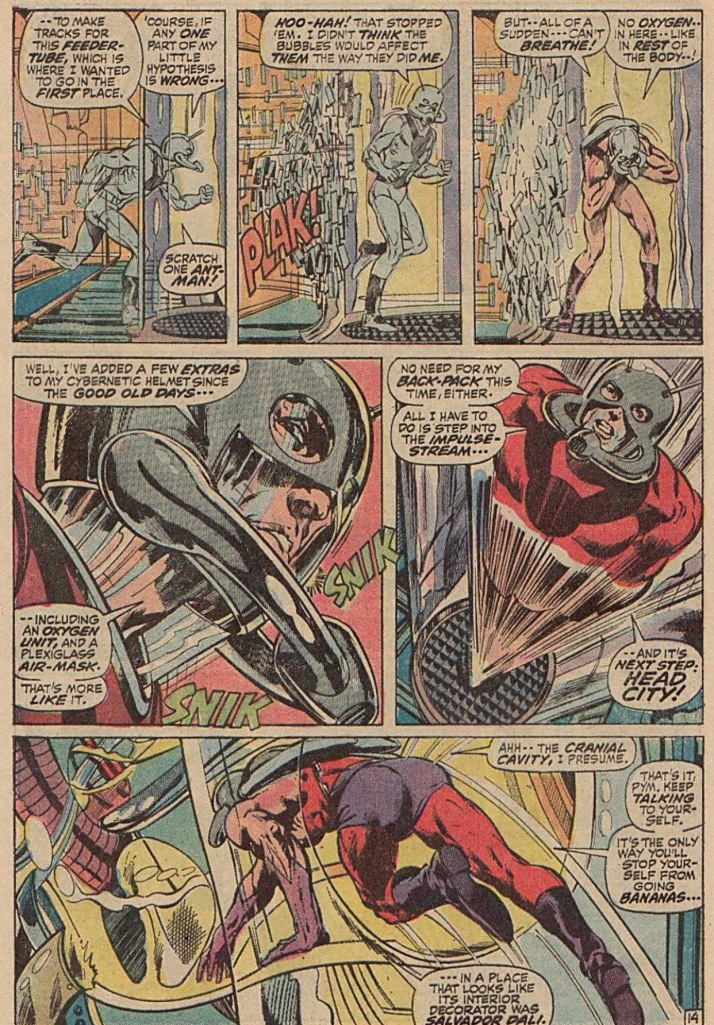