Black Widow (Natalia Alianovna “Natasha” Romanova, also known as Natasha Romanoff) is a fictional superhero appearing in American comic books published by Marvel Comics. Created by editor and plotter Stan Lee, scripter Don Rico, and artist Don Heck, the character first appeared in Tales of Suspense No. 52 (April 1964). The character was first introduced as a Russian spy, an antagonist of the superhero Iron Man. She later defected to the United States, becoming an agent of the fictional spy agency S.H.I.E.L.D., and a member of the superhero team the Avengers.

Natasha was born in Stalingrad (now Volgograd), Russia. The first and best-known Black Widow is a Russian agent trained as a spy, martial artist, and sniper, and outfitted with an arsenal of high-tech weaponry, including a pair of wrist-mounted energy weapons dubbed her “Widow’s Bite”. She wears no costume during her first few appearances but simply evening wear and a veil. Romanova eventually defects to the U.S. for reasons that include her love for the reluctant-criminal turned superhero archer, Hawkeye.

The Black Widow’s first appearances were as a recurring, non-costumed, Russian-spy antagonist in the feature “Iron Man”, beginning in Tales of Suspense No. 52 (April 1964). Five issues later, she recruited the besotted costumed archer and later superhero Hawkeye to her cause. Her government later supplied her with her first Black Widow costume and high-tech weaponry, but she eventually defected to the United States after appearing, temporarily brainwashed against the U.S., in the superhero-team series The Avengers No. 29 (July 1966). The Widow later became a recurring ally of the team before officially becoming its sixteenth member many years later.

The Black Widow was visually updated in 1970: The Amazing Spider-Man No. 86 (July 1970) reintroduced her with shoulder-length red hair (instead of her former short black hair), a skintight black costume, and wristbands which fired spider threads. This would become the appearance most commonly associated with the character. 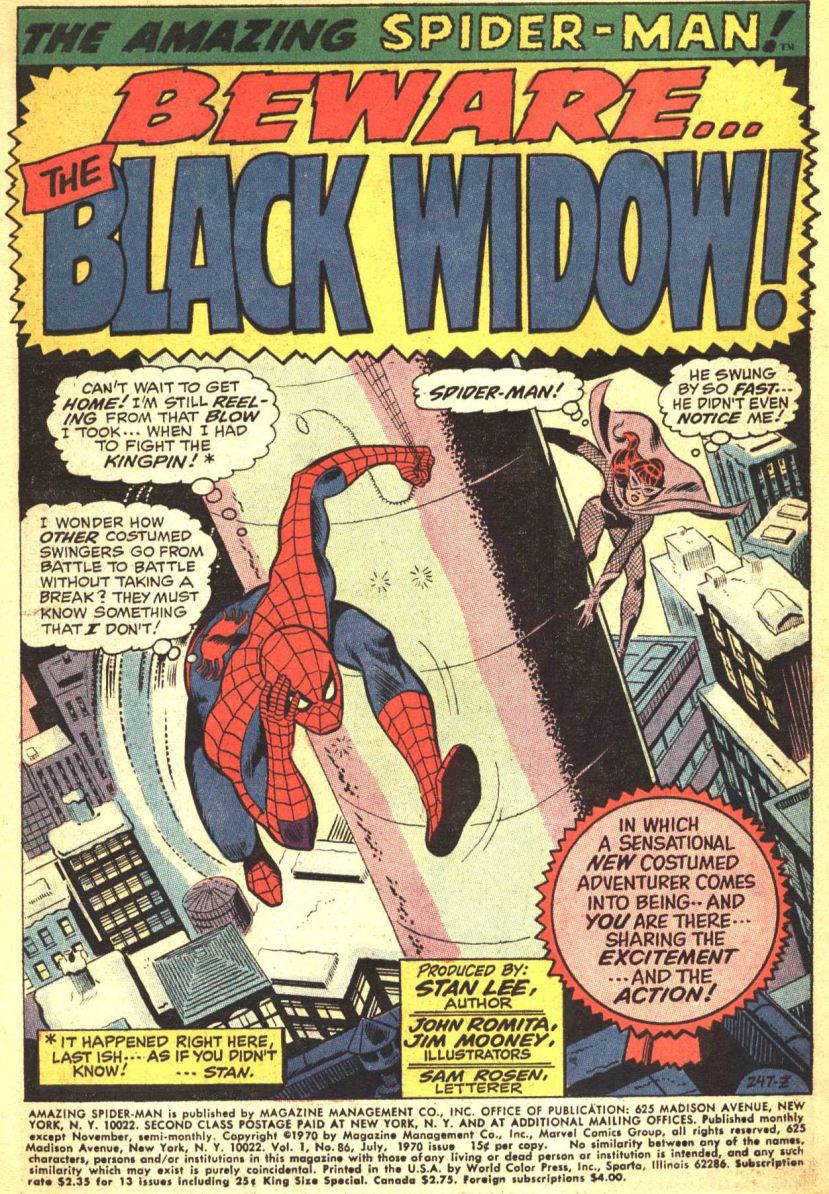 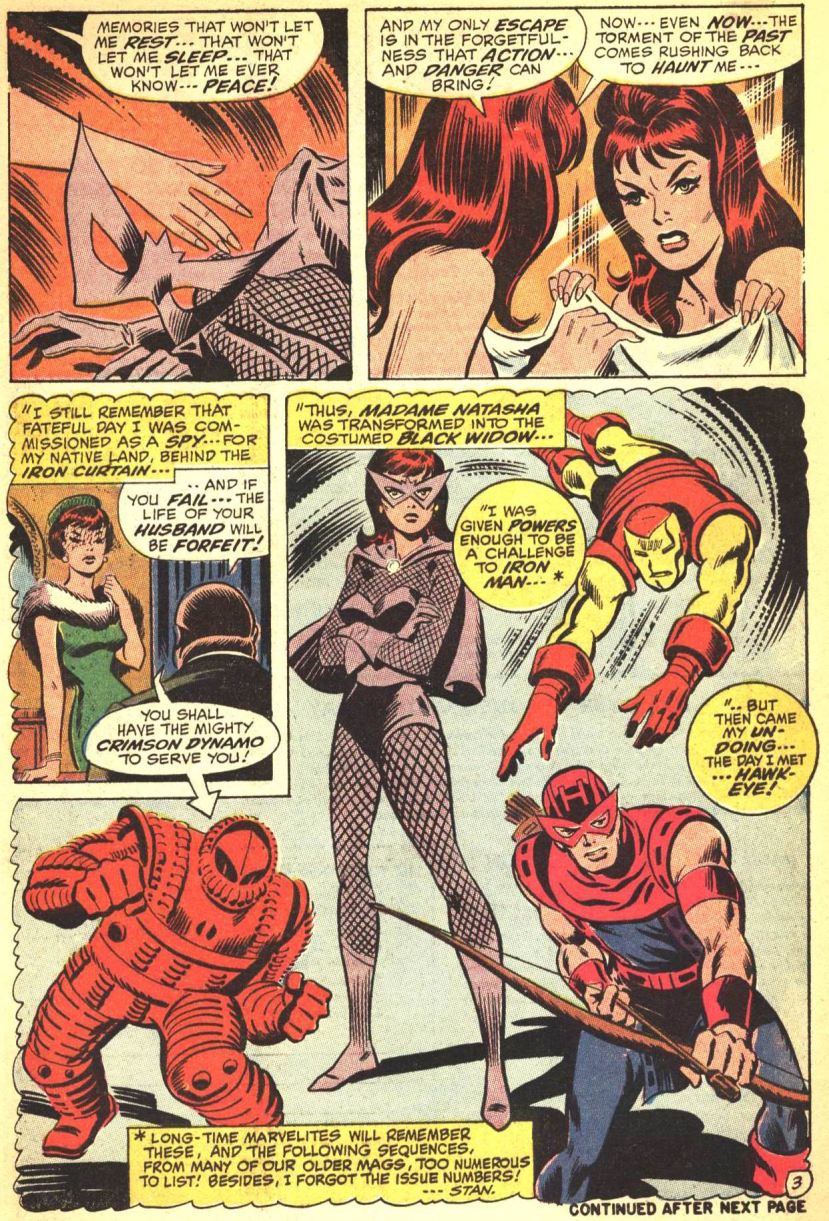 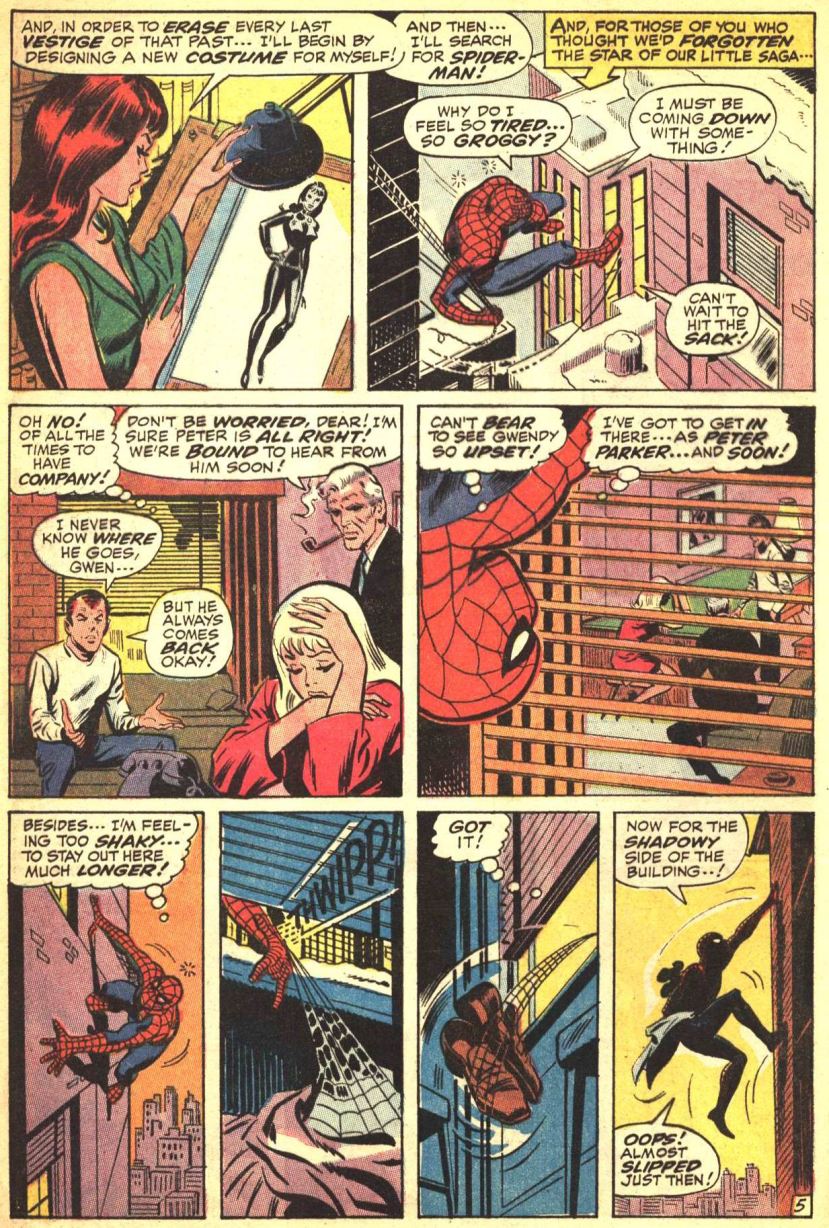 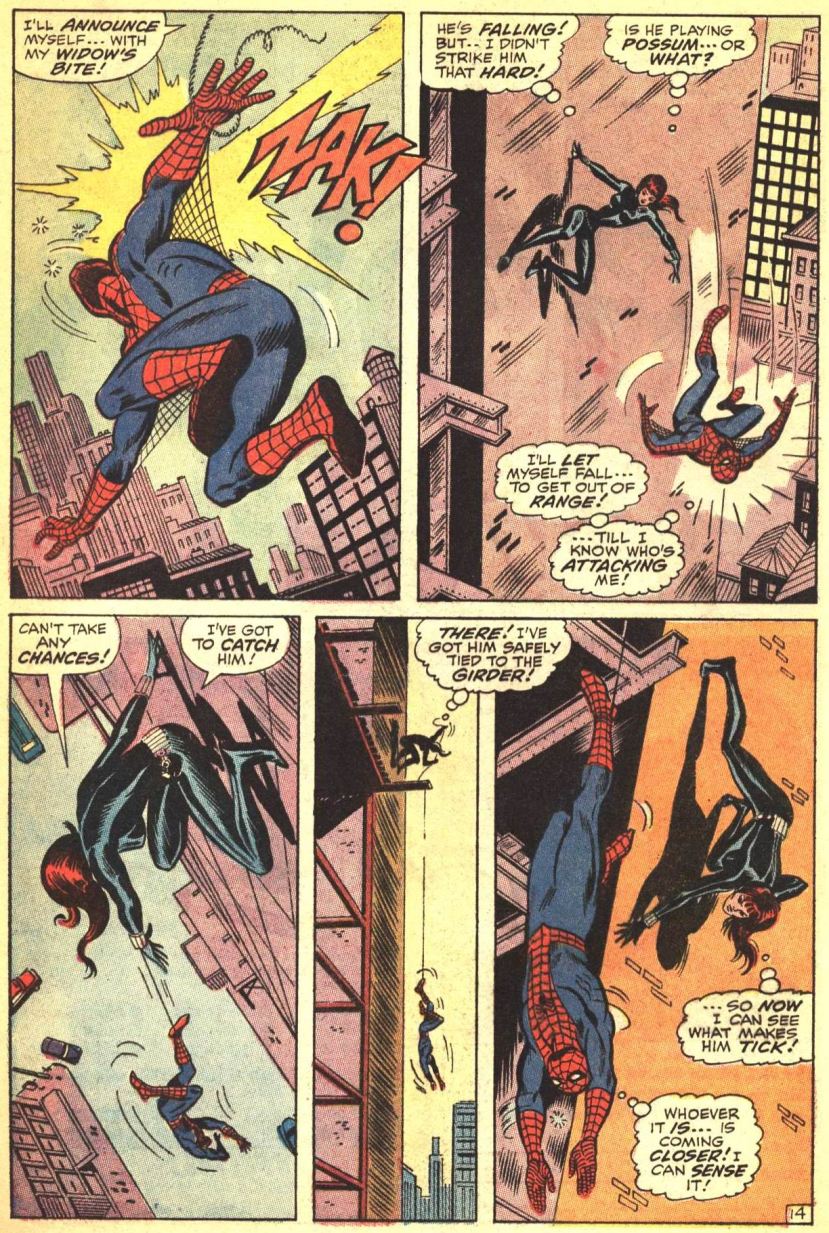 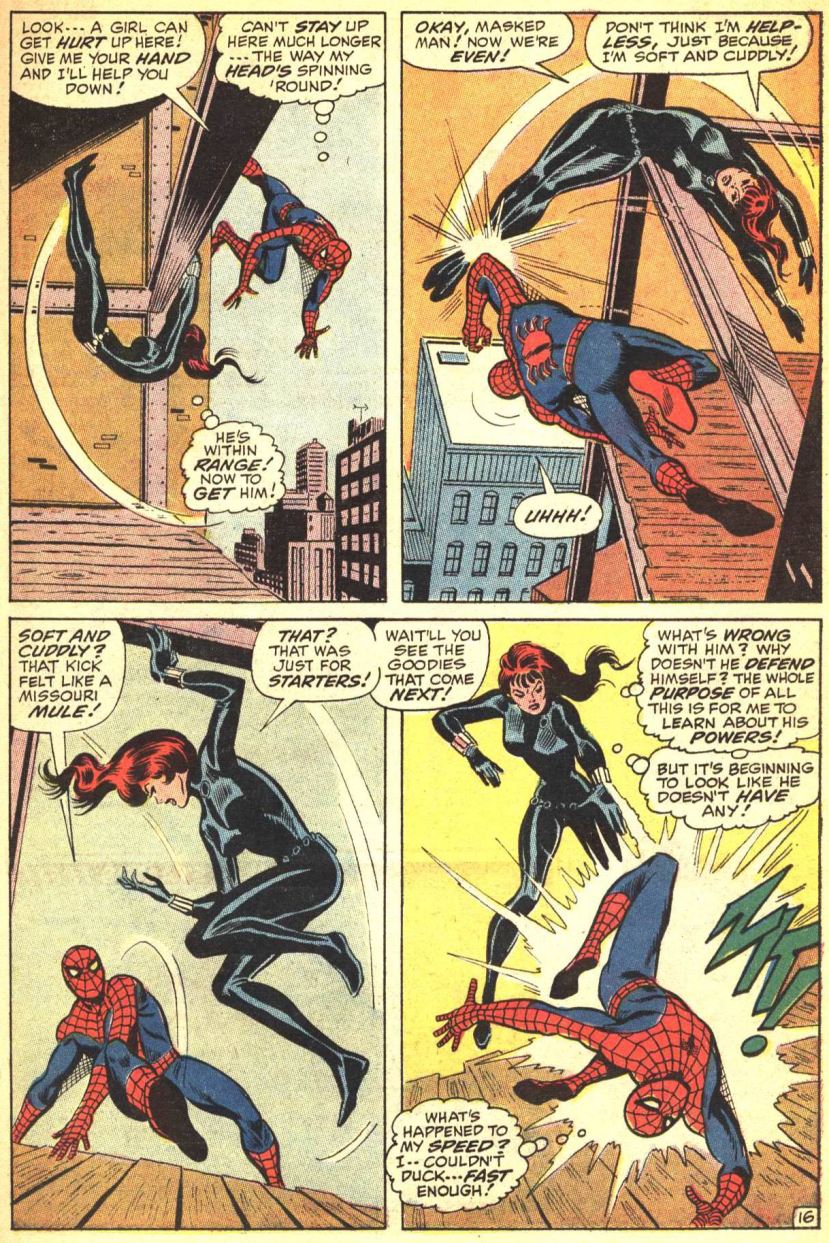 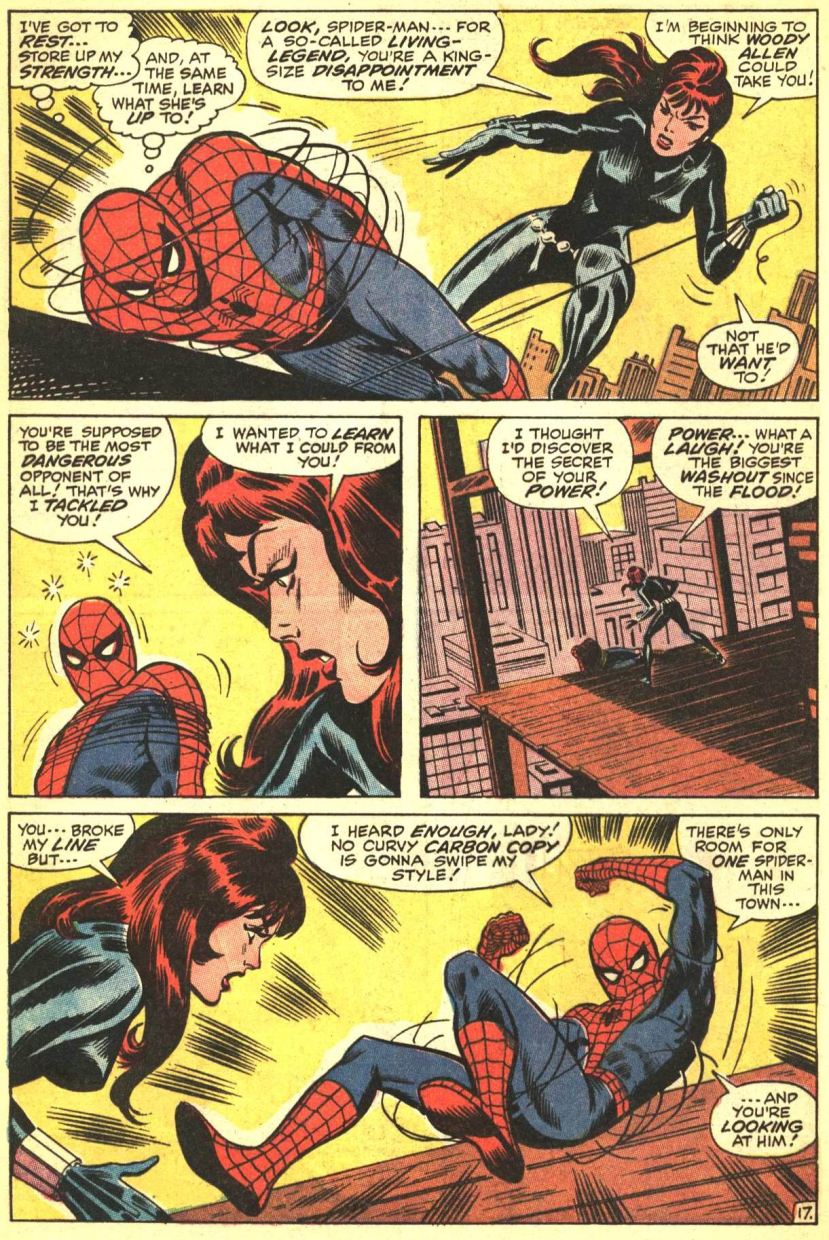 First hints to Natasha Romanova’s childhood come by Ivan Petrovich, who is introduced as her middle-aged chauffeur and confidant in the Black Widow’s 1970s Amazing Adventures. The man tells Matt Murdock how he had been given custody of little Natasha by a woman just before her death during the Battle of Stalingrad in autumn 1942. He had consequently felt committed to raise the orphan as a surrogate father and she had eventually trained as a Soviet spy, being eager to help her homeland. In another flashback, set in the fictional island of Madripoor in 1941, Petrovich helps Captain America and the mutant Logan, who would later become the Canadian super-agent and costumed hero Wolverine, to rescue Natasha from Nazis. 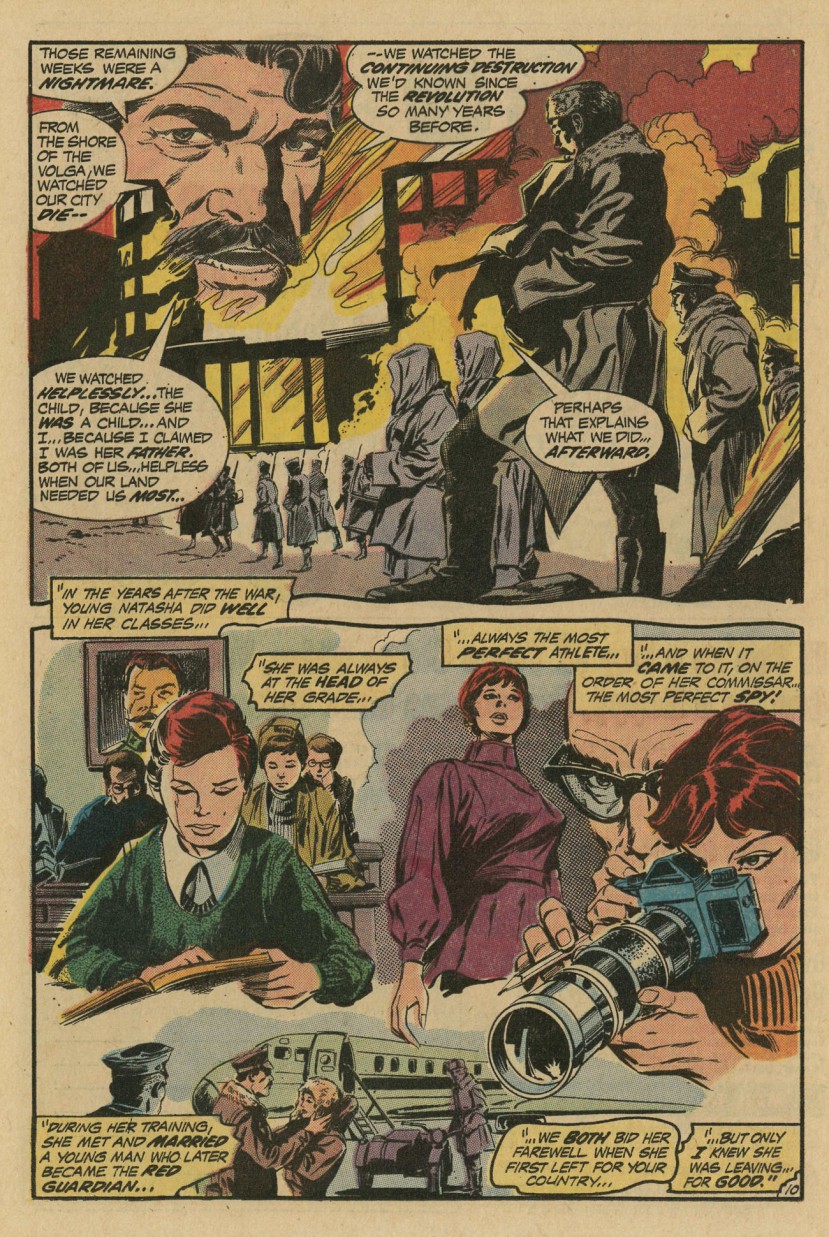 A revised, retconned origin establishes her as being raised from very early childhood by the U.S.S.R.’s “Black Widow Ops” program, rather than solely by Ivan Petrovitch. Petrovitch had taken her to Department X, with other young female orphans, where she was brainwashed, and trained in combat and espionage at the covert “Red Room” facility. There, she is biotechnologically and psycho-technologically enhanced—an accounting that provides a rationale for her unusually long and youthful lifespan.

During that time she had some training under Winter Soldier, and the pair even had a short romance. Each Black Widow is deployed with false memories to help ensure her loyalty. Romanova eventually discovers this, including the fact that she had never, as she had believed, been a ballerina. She further discovers that the Red Room is still active as “2R”.

During the incursion event between Earth 616 and Earth 1610, Natasha is involved in the final battle between the Marvel Universe’s superheroes and the Ultimate Universe’s Children of Tomorrow. She pilots a ship holding a handpicked few to restart humanity after the universe ends, copiloted by Jessica Drew. Her ship is shot down during the battle though, and she is killed in the ensuing explosion. 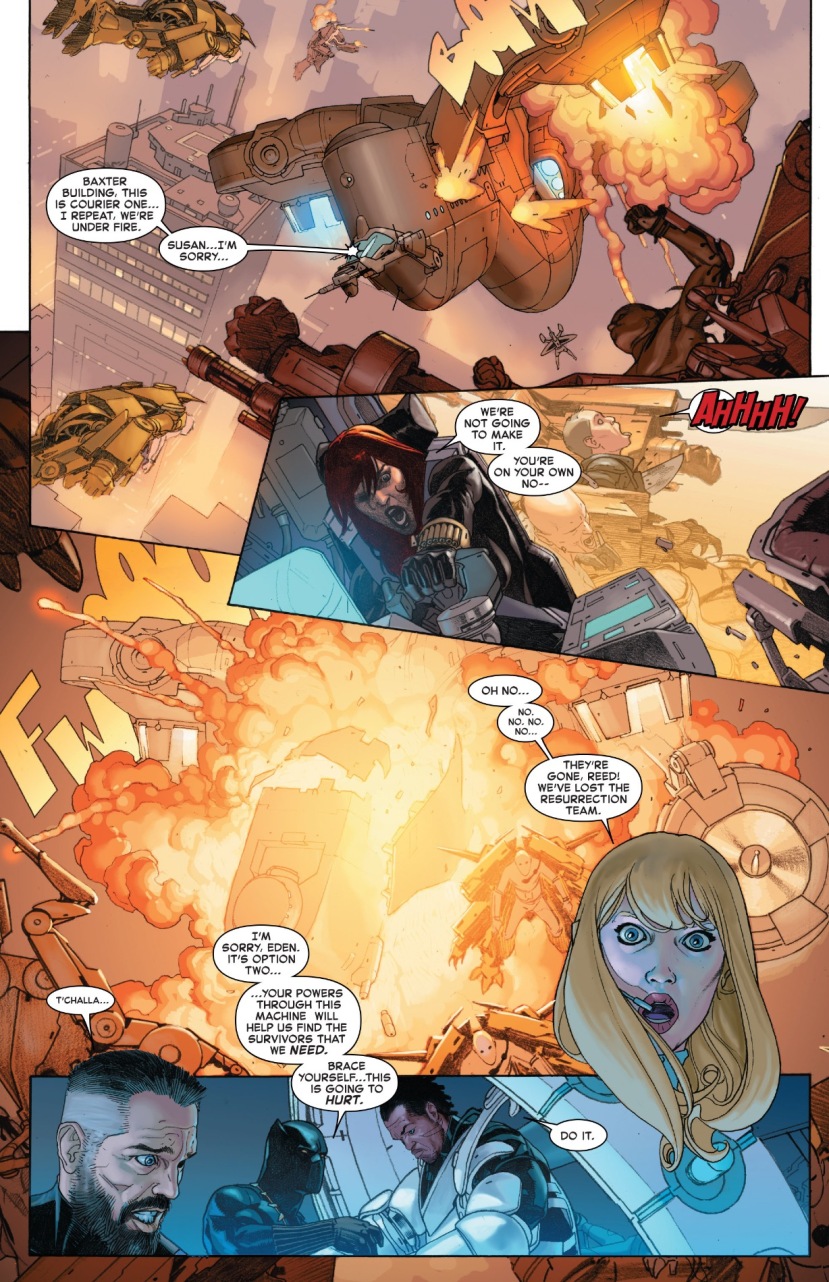 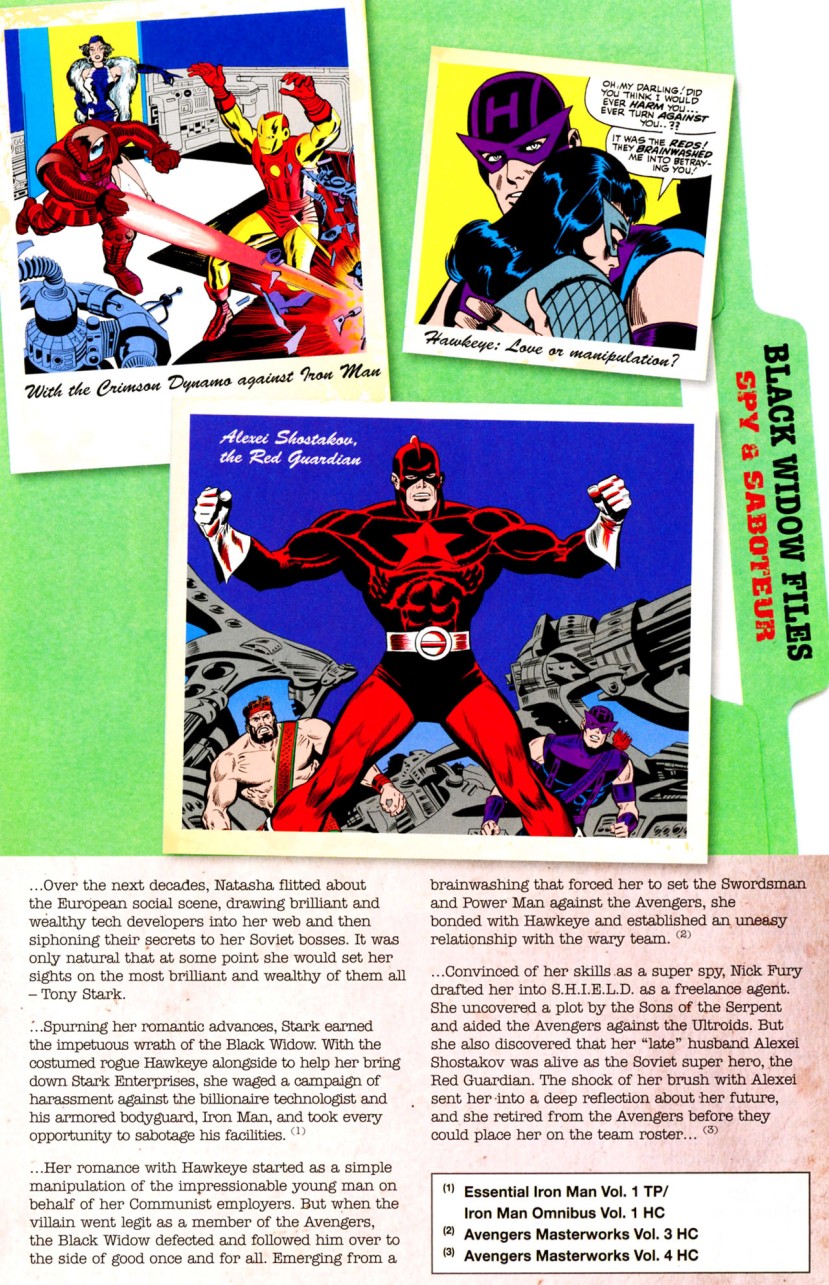